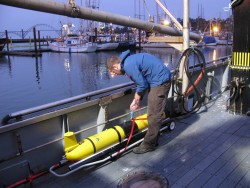 The sea trials phase of the Ocean Observatories Initiative (OOI) coastal gliders took place off the Oregon Coast this month to verify the design and performance of this key component of the OOI.

The glider tests, called product verification tests, initiated on the East Coast with the successful launch of Teledyne Webb Research’s SG-2 Slocum glider on Nov. 3, 2011. That test glider, deployed by the OOI’s Coastal and Global Scales Node (CGSN) team from the Woods Hole Oceanographic Institution’s R/V Tioga, conducted a 15-day deployment off the New England Coast near Martha’s Vineyard, with recovery on Nov. 18.

While in the water, the glider performed a set of missions to verify design specifications. The glider next was deployed in January off the Oregon Coast for a second set of missions. The CGSN team located at Oregon State University is conducting that set of ongoing tests.

The OOI coastal glider, a key component of the OOI, will gather ocean data including temperature, salinity, chlorophyll and dissolved organic matter fluorescence, optical backscatter, light levels, dissolved oxygen and water velocity.  The CGSN team is testing the first glider acquired by OOI to verify that the design meets specifications such as proper functioning of all instruments, expected battery usage and flight characteristics.

Production gliders are scheduled to be deployed as part of the Endurance Array off the coasts of Oregon and Washington in Spring 2012. A similar set of gliders will be deployed off the coast of New England as part of the Pioneer Array in Fall 2012.These gliders will provide a continuous stream of information about the ocean to researchers and all those accessing OOI data from any computer or on any mobile device.

The CGSN component of the OOI is being developed and constructed by Woods Hole Oceanographic Institution, Oregon State University and Scripps Institution of Oceanography. 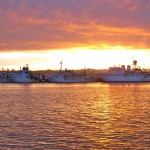 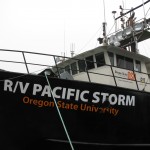 Oregon State University’s research vessel the R/V Pacific Storm from which the glider was deployed off Newport, OR. (Photo Credit: Jack Barth, OSU) 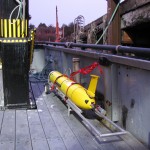 The glider secured to the deck of the R/V Pacific Storm. (Photo Credit: Jack Barth, OSU) 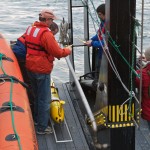 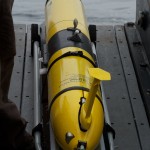 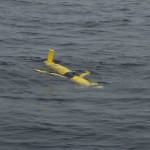 The glider moments after it was deployed from the R/V Pacific Storm. (Photo Credit: Craig Hayslip, OSU)