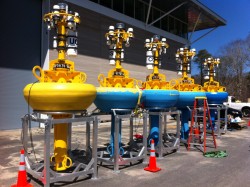 The Ocean Observatories Initiative (OOI) team has deployed key pieces of the coastal OOI infrastructure along both east and west coasts. These include the second phase deployment of the Pioneer Array off the coast of New England and the initial deployment for the Endurance Array in the Northeast Pacific.

The Endurance Array will include a network of fixed and mobile assets to observe cross-shelf and along-shelf variability in the coastal upwelling region of the Oregon and Washington coasts, and provide synoptic, multi-scale observations of the eastern boundary current regime. 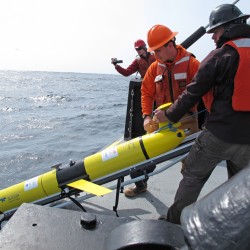 The Pioneer Array deployment, which took place April 11 to April 20 on the Research Vessel Knorr, involved recovery of two Wire-Following Profiler Moorings and the Pioneer Central Surface Mooring and deployment of five Wire-Following Profiler Moorings and three Gliders. Twenty-nine instruments were deployed on the moorings and 15 instruments on the gliders. A total of six gliders will be deployed as part of the Pioneer Array, with three of that fleet deployed at this time.

The region of the continental shelf where the Pioneer Array is deployed is characterized by sharp gradients in ocean temperature and other properties across the shelf, currents that flow along the shelf, and strong biological productivity

The Coastal Global Component of the OOI is led by scientists from the Woods Hole Oceanographic Institution, Oregon State University and Scripps Institution of Oceanography.

In addition, the OOI team recently conducted testing of innovative, University of Washington-designed and built moorings that will be installed as part of the cabled infrastructure of the OOI in Northeast Pacific. Testing went well and the moorings are slated to be installed during VISIONS ’14 cruise this summer. More details will be posted on this upcoming event on the OOI Website in the upcoming weeks.

Click Here to read more about the recent Deep Profiler Test. Additional UW coverage of the Mooring Tests can be found here. 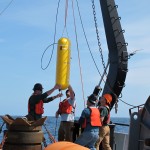 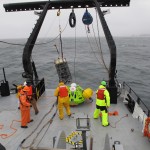 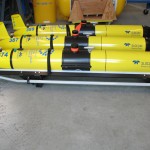 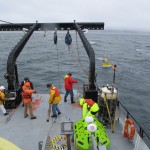