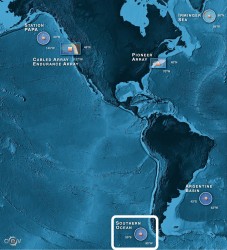 February 18, 2015, with winds at 20 knots (23 mph), an improvement from previous days, an OOI team, led by Woods Hole Oceanographic Institution, deployed the surface mooring at the OOI Southern Ocean array.

“About 1800 local we got the anchor dropped and made history,” says Bob Weller, WHOI Senior Scientist and cruise Chief Scientist in a ship communication. “This is the most southerly surface mooring established as a sustained ocean observing platform and marks a real step forward for ocean and climate science.”

The Southern Ocean array is one of four sites in the OOI focusing on the critical, yet under-sampled, high-latitude regions of the Pacific and Atlantic.  It includes a network of moorings that will support sensors for measurement of air-sea fluxes of heat, moisture and momentum; physical, biological and chemical properties throughout the water column.

The Southern Ocean deployment cruise departed February 12 from Punta Arenas, Chile on the R/V Atlantis on a 21 day cruise to install one global surface mooring, one global profiler mooring, two flanking moorings, and a glider. Once the Southern Ocean deployment is complete, the team will return to port at Punta Arenas to change out the crew and load equipment for deployment at the OOI’s second Southern Hemisphere site, located in the Argentine Basin. The deployment cruise for the Argentine Basin is set to depart March 8.