The characteristic dynamical feature in the Pioneer Array region is the shelfbreak front [1], typically located near the break in topography between shelf and slope – roughly at the 100 m isobath [2]. The Pioneer Array was designed to address the OOI science theme of Coastal Ocean Dynamics and Ecosystems, with a particular focus on shelf/slope exchange near the front [3]. Since their initial deployment in November 2013, Pioneer Array moorings, gliders, and autonomous underwater vehicles, all outfitted with interdisciplinary sensors, have allowed investigation of exchange processes.

The nature of shelf/slope exchange in the New England shelfbreak region is changing [4]. In particular, anomalous onshore intrusions of warm, salty water associated with Gulf Stream rings [5] and meanders [6] appear to be more frequent and penetrate further inshore. These dramatic short-term events, as well as seasonal anomalies [7], have impacted ecosystems and commercial fisheries [8].

Pioneer Array glider data were used along with satellite SST imagery to document an intrusion of Gulf Stream warm-core ring water onto continental shelf, extending hundreds of kilometers to the southwest along the shelfbreak ([5]; Fig. 1). This is a previously undocumented exchange process, resulting from topographically induced vorticity variation of the ring water, rather than from entrainment in the shelfbreak frontal jet. Such intrusions have important biogeochemical implications, such as facilitating migration of marine species across the shelfbreak barrier and transporting low-nutrient ring water to the otherwise productive shelfbreak region.

Researchers continue to use Pioneer Array data to investigate frontal processes and shelf/slope exchange, such as nutrient transport and the consequences for primary production and higher trophic levels. 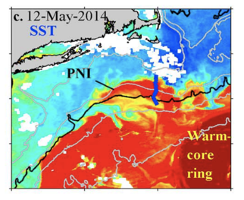