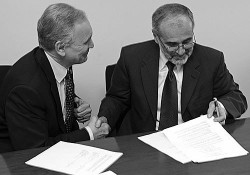 US-Canada collaboration on ocean research takes a major step  forward  today as Robert Gagosian, president and CEO of Consortium for Ocean Leadership, and Martin Taylor, president and CEO of Ocean Networks Canada, sign a Memorandum of Understanding pledging to work closely together as they manage and operate world-leading ocean observing systems. This agreement extends existing strong relationships among the international science teams.

“In this case, the whole is truly greater than the sum of its parts,” observed Taylor. “Working independently, there’s no doubt that the Canadian and U.S. teams would make significant contributions to our scientific understanding of the ocean. But by working together, we’ll be able to provide scientists with a wider breadth of capabilities and ongoing insights, helping to accelerate transformational advances in ocean sciences.”

The ocean covers more than 70 percent of the Earth’s surface and directly affects people’s quality of life around the globe. Yet, our knowledge of the ocean remains limited.  Now more than ever, we need an in-depth understanding of complex ocean processes, hazards, and phenomena such as earthquakes and tsunamis, climate change, and ocean acidification. We need to leverage the best that technology has to offer to fundamentally augment ship- and satellite-based approaches to ocean science, in order to transform our understanding of how the ocean works.

The OOI, NEPTUNE Canada, and VENUS combine continuous power, remotely operated sensors and instruments, and the streaming of continuous data via sophisticated computing networks and the Internet to scientists, policymakers, students, and the general public.

“These networks will radically change the rate and scale of ocean data collection, noted Gagosian, “and thereby the range and complexity of questions that can be answered by ocean scientists.” Tim Cowles, OOI program director, added that “the availability of this high-quality data will play an invaluable role in helping scientists to track climate, evaluate ecosystem change, and address other critical ocean processes.”

The OOI network is being installed in critical areas of the open and coastal ocean, with hundreds of sensors extending from the seafloor, through the waters of the ocean, up to where sea and sky meet. Construction of the OOI began in late 2009 and will be completed in 2014. NEPTUNE Canada, located on the Juan de Fuca tectonic plate off the coast of British Columbia, became operational in late 2009. As the world’s first regional-scale, cabled deep-ocean observatory, NEPTUNE Canada provides unprecedented access into the ocean’s depths. VENUS operates two cabled observatories in coastal waters near Victoria and Vancouver, supporting studies of ocean processes and marine ecology.

Ocean Networks Canada is a not-for-profit society created by the University of Victoria to build and sustain global leadership in ocean science and technology through the NEPTUNE Canada and VENUS cabled ocean observatories, as well as the Centre for Enterprise and Engagement (ONCCEE). Principal funding agencies include the Canada Foundation for Innovation, the Government of British Columbia, the Natural Sciences and Engineering Research Council, CANARIE, and Western Economic Diversification.

The OOI is funded by the U.S. National Science Foundation, and managed by the Consortium for Ocean Leadership, a non-profit organization based in Washington, D.C. that represents 94 of the leading public and private ocean research and education institutions, aquaria, and industry. Ocean Leadership is responsible for the construction and initial operations of the OOI, with the help of three key implementing organizations (IOs): the University of California, San Diego, the University of Washington, and Woods Hole Oceanographic Institution, with assistance from Oregon State University and Scripps Institution of Oceanography. A fourth IO will be competitively selected in 2010 to provide an Education and Public Engagement infrastructure for the OOI.

For more information about the Consortium for Ocean Leadership see www.oceanleadership.org.

For more information about the Ocean Observatories Initiative see oceanobservatories.org.

Reporters interested in receiving photos from today’s signing event and/or maps of the ocean observatories should directly email Rick Searle and/or Sarah Saunders.