Mobile platforms, such as Autonomous Underwater Vehicles (AUVs), provide much-needed flexibility in ocean observations as they allow for the movement of sensors through the water in three-dimensions. 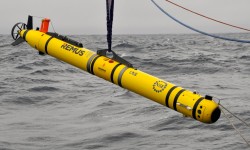 AUVs are self-propelled vehicles using mechanisms such as propellers and thrusters to move themselves through the water column. Optimum speeds for AUVs used in oceanographic applications are near 1.7 m s-1, while maximum speeds of about 2.5 m s-1 may be reached.

AUVs are able to house multiple sensors and travel for long distances, communicating with and accepting instructions from operators on shore.  These vehicles have been used for many purposes within the oceanographic community including high resolution mapping of the seafloor, observing throughout the water column and operating in oceans covered with ice where sampling from vessels is greatly restricted.

OOI AUVs have a high payload capacity relative to gliders, allowing them to run continuous missions of a day or more, while carrying a broad suite of sensors for interdisciplinary observations. By rising to the surface, the AUVs are able to obtain their position via GPS.

AUVs will operate at the Pioneer Array and will be deployed by ship for specific data collection missions.