900 kilometers of power and bandwidth

More than 900 kilometers of fiber-optic cables off the Oregon coast make it possible to monitor volcanic and hydrothermal activity, methane seeps, earthquakes, and myriad ocean processes in coastal and blue water environments. 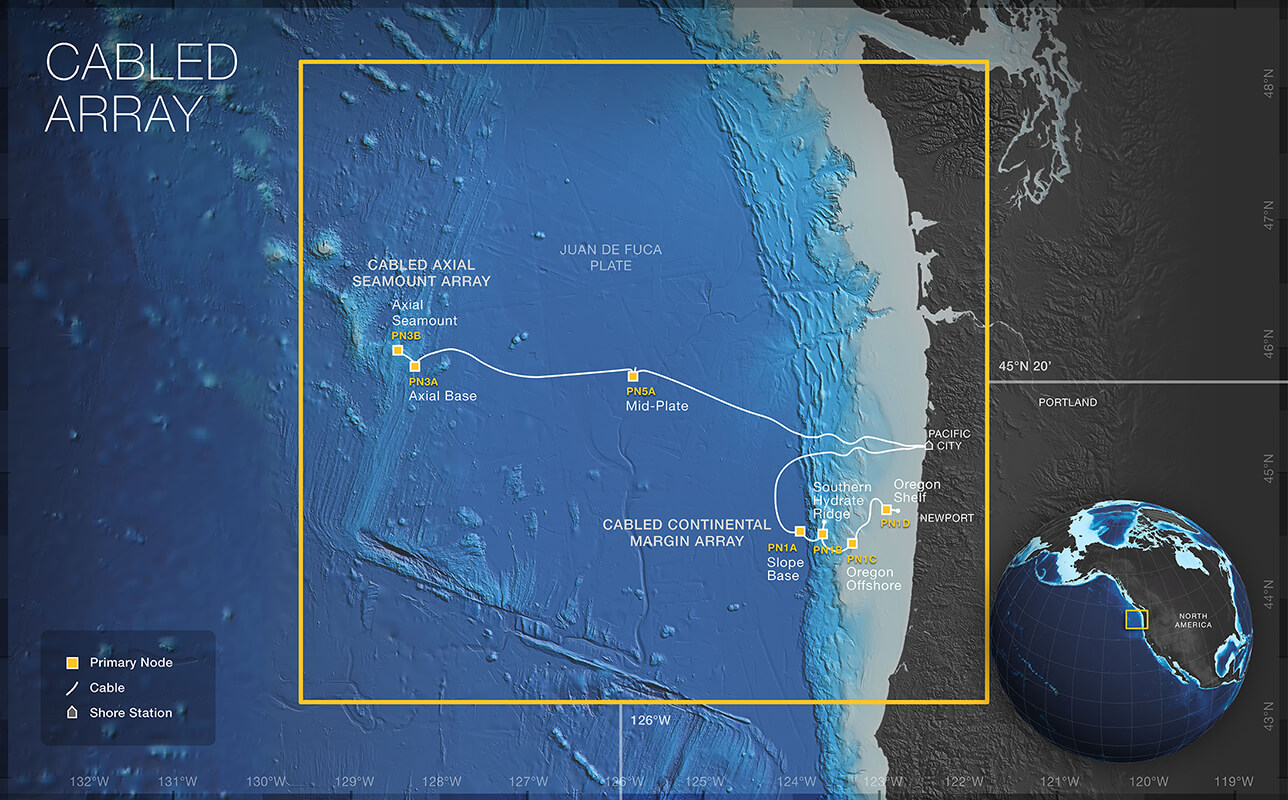 The cabled network, the Regional Cabled Array (RCA), is the first U.S. ocean observatory to span a tectonic plate. RCA provides unprecedented power (10 kilovolts, 8 kilowatt), bandwidth (10 Gigabit Ethernet (GbE), and real-time two-way communication to sensors and instruments on the seafloor and throughout the water column across the Juan de Fuca plate. Power and bandwidth are provided by a Shore Station in Pacific City, Oregon which is the termination point for the submarine cables and connection point to terrestrial fibers.

Completed in 2014, one segment of the submarine cable extends to a study site at the base of the continental margin called Slope Base (2900 m), to Southern Hydrate Ridge (800 m), and to the Oregon Endurance Offshore (600 m) and Shelf (80 m) sites. A second cable extends 498 kilometers (310 miles) west to the Axial Seamount study site on the Juan de Fuca Ridge.

RCA powers three arrays conducting different scientific investigations: The Cabled Continental Margin Array, the Cabled Axial Seamount Array, and the Cabled Endurance Array off Oregon. More than 150 core OOI instruments are connected to the RCA, which has significant expansion capabilities. In addition, there are several externally funded instruments (National Science Foundation, NASA, Office of Navy Research, and the German Federal MInistry of Education and Research) on the RCA focused on p

RCA’s primary infrastructure distributes power and communication from its land-based Shore Station in Pacific City, Oregon to sub-sea terminals (Primary Nodes) at depths of up to ~3000 meters across the Juan de Fuca Plate.

The Primary Infrastructure is made up of several components, beginning with the Backhaul System and infrastructure within the Shore Station. The Backhaul System provides Internet connectivity to/from the Shore Station and a CyperPOP(cyber point of presence) and data center hosting RCA and a West Coast Cyberinfrasructure mirror in Seattle, Washington.

Connecting the Shore Station to the Primary Nodes are approximately ~900 km of Backbone Cables.  Backbone Cables are fiber-optic telecommunication cables, a telecom industry standard, known for long lifetimes. One cable extends south from the Shore Station to the Slope Base, Southern Hydrate Ridge, and Oregon Offshore and Shelf sites. The second backbone cable extends across the Juan de Fuca tectonic plate to the Axial Seamount study site on the Juan de Fuca Ridge, reaching ocean depths as great as 2,900 meters.

Primary Nodes provide high power (8kW) and high bandwidth (10 GbE) two-way communications between secondary junction boxes, instruments and moorings and the Shore Station. They also are distribution centers for extension cables that provide power and communication to sensors, instrument platforms, and moorings for continuous, real-time interactive science experiments at the seafloor and throughout the water column.

PN01A at the base of the Cascadia Accretionary Margin (OR Slope Base) PN01B at Southern Hydrate Ridge PN01C on the continental slope off Newport, OR (Oregon Offshore) PN01D on the continental shelf off Newport, OR (Oregon Shelf) PN03A at the base of Axial Seamount (Axial Base) PN03B at the summit of Axial Seamount (ASHES Vent Field) PN05A at Mid-Plate, uninstrumented

Each Primary Node houses a Medium Voltage Converter that converts the 10 kVdc primary level voltage to 375 Vdc levels. Power (375 V) and communication (1 GbE) are distributed from the Primary Nodes to secondary infrastructure (Low- and Medium-Power Nodes) at science work sites through extension cables connected to scientific ports on the nodes. Additionally, each Primary Node has two science ports that allow power and full bandwidth (10GbE) connections to specific devices, such as high definition cameras as well as one expansion port to send full power and bandwidth over long distances (>200 km) to other instrument locations.

Regional Cabled Array secondary infrastructure consists of 18 Medium- and Low-Power Junction Boxes (J-boxes) and Low-Voltage Nodes that distribute power, communication, and timing to instruments. Whether an instrument is connected to a Medium- or Low-Power Junction Box depends on the power requirement of that instrument. Medium-Power J-Boxes are connected directly to Primary Nodes through extension cables and receive an input voltage at 375 Volts DC and an input data link at 1 GigE.  Each junction box has eight instrument ports that provide 12 to 48 V and has 10/100BASE-T, RS232 or RS485 data links.

Low-Power Junction Boxes are connected to Low-Voltage Nodes and have an input voltage at 48 Volts DC and an input data link at 10/100BASE-T.  They also have eight instrument ports that provide 12 to 48 V and have 10/100BASE-T, RS232 or RS485 data links.

Instruments providing data on water column properties are located on the seafloor and on Deep and Shallow Profiler Moorings. These instruments, coupled with those to collect data on seafloor and biological processes, total 150.  Power and communications are provided to secondary infrastructure and instruments via 61 km (29 km buried) of extension cables.

Of the total 870 kilometers (540 miles) of RCA’s undersea fiber optic cable, 290 kilometers (180 miles) was buried out to a water depth of ~ 1500 m. Remotely operated vehicles (ROVs) were used to conduct post-lay inspections and any needed remedial burial. The remaining 579 kilometers (360 miles) of cable were laid in deep waters without the need of burial.