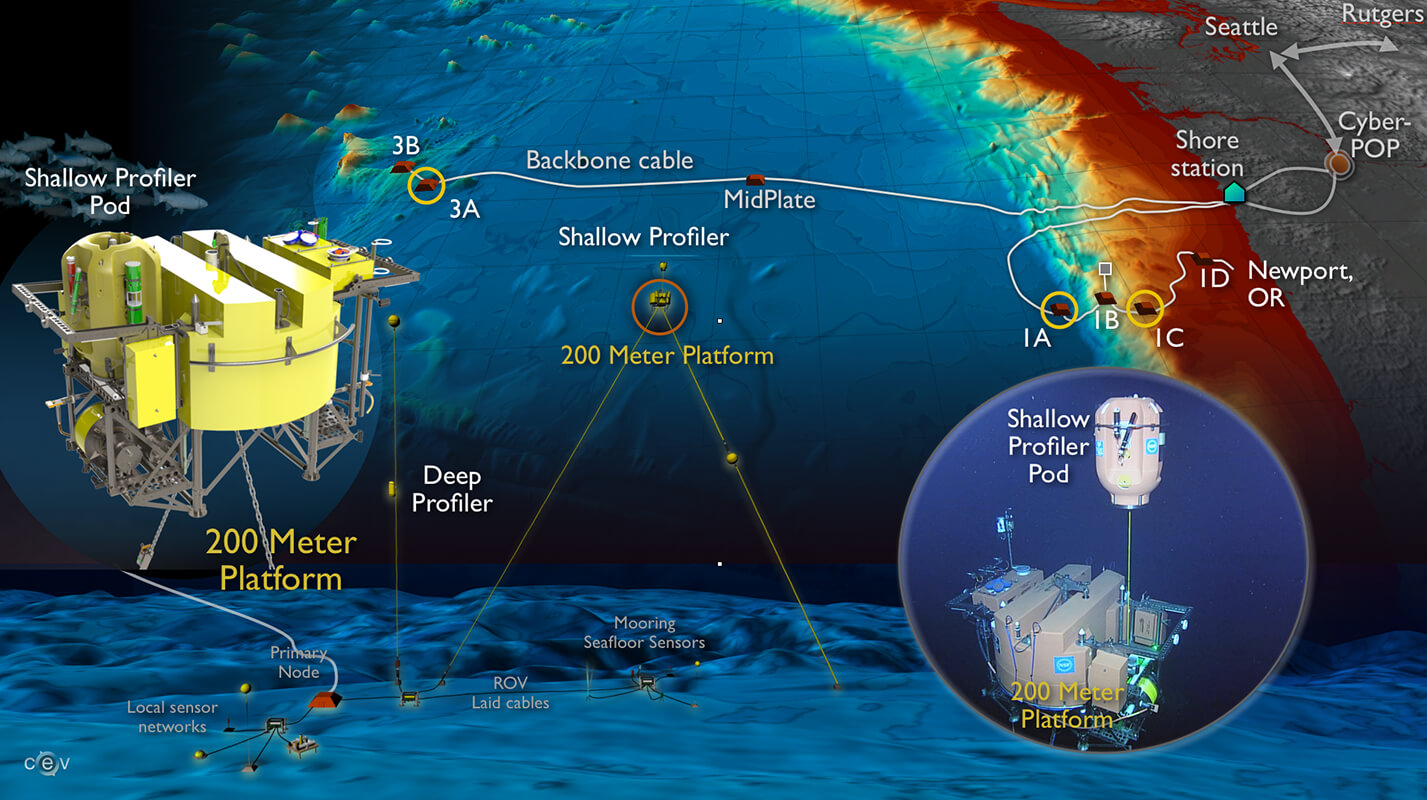 Profiler moorings are used throughout the OOI, enabling the sampling of water column parameters at a high vertical resolution.

Global Profiler Moorings are located at the Apex site of the triangular Global Irminger Sea and Station Papa Arrays next to the Apex Surface Moorings.  Global Profiler Moorings include one or two Wire-Following Profilers that move through the water column along the mooring riser, continuously sampling ocean characteristics over a specified depth interval.

Cabled Deep Profiler Moorings are attached to a fiber-optic cable and host an instrumented modified McLane Wire-Following Profiler that travels from depths as deep as~ 2900 meters underwater (at the Axial Seamount Slope Base) to ~125 meters  beneath the ocean’s surface. Each profiler hosts up to six instruments. Each Deep Profiler Mooring is paired with a Shallow Profiler Mooring (see below). Data are downloaded in real-time via WiFi and are also downloaded after completion of a two-way profile via an inductive link at the base of the mooring, while the vehicle is recharging. Fiber-optic cable provides the mooring with a large supply of power and bandwidth. The cable is co-located with a Low-Power junction box that collects complementary seafloor data.

Attached to fiber optic cables, two-legged Shallow Profiler Moorings are high-power (3 kW) and high bandwidth (1 GigE) water column moorings with a broad suite of engineering and science-focused sensors. They each host a 12 ft, 7,000 lb platform ~ 200 meters beneath the ocean’s surface. 200 watts of power is provided to the instruments. The platform hosts an instrumented Platform Interface Assembly (which includes up to eight science instruments) and an instrumented winched Shallow Profiler Pod. This Shallow Profiler Pod, or science pod, houses up to 10 science instruments and is tethered to a mooring-mounted winch that pays out fiber optic cable allowing it to rise through the water column until a fixed depth (~5 m below the sea surface to 200 meters deep).

Two-way, real-time communication allows powerful adaptive sampling capabilities that include pausing of instrument packages in the water column at specific chemical-temperature-biological layers. Each mooring has expansion capabilities for additional instrumentation. Each Shallow Profiler Mooring is also paired with a Deep Profiler Mooring to capture data spanning depths just above the seafloor to ~ 5 m beneath the ocean’s surface.

Coastal Profiler Moorings are located on the Coastal Pioneer and Endurance Arrays and contain a Wire-Following Profiler that houses instruments.The Wire-Following Profiler moves through the water column along the mooring riser, continuously sampling ocean characteristics over a specified depth interval (20 meters below sea surface to 20 meters above the bottom).