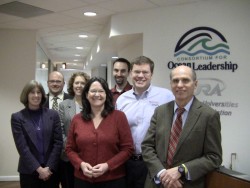 The newest members of the Ocean Observatories Initiative (OOI) team, the Implementing Organization (IO) for Education and Public Engagement (EPE), visited the Consortium for Ocean Leadership on March 24-25 kicking off plans as they integrate into the program and move forward building the software interfaces and web-based tools that ultimately will allow educators to bring the ocean into their learning environments in real time.

Rutgers, The State University of New Jersey, with its partners University of Maine and Raytheon Mission Operations and Services, is responsible for the education and public engagement software infrastructure of the OOI program. As the EPE IO the Rutgers team will lead the development of educational capabilities for the OOI and leverage the system’s cyberinfrastructure capabilities by constructing a series of software and web-based social networking tools to engage a wide range of users including faculty, graduate and undergraduate students, informal science educators and the general public. Software will be designed to provide science educators with a suite of tools allowing them to enhance their graduate and undergraduate education activities and engage the general public using ocean observation data from the OOI.

Scott Glenn, Principal Investigator for the EPE IO, has much experience bring real time marine science into undergraduate labs and classrooms. Glenn, an award-winning professor at Rutgers, established the Coastal Ocean Observation Lab (COOL) at the university in 1992 to conduct research focused on the bio-physical processes of the coastal ocean. Not only is the COOL facility involved in real world research projects where operational ocean observatories are used to collect real-time data, but it also serves as a classroom for undergraduate and graduate students. COOL students played a major role in the historic first time crossing of the Atlantic Ocean by a glider, the Scarlet Knight, in 2009. That glider, which traveled 4,500 kilometers from the coast of New Jersey to Spain, is now on exhibit at the Smithsonian Museum of Natural History.

During that historic voyage and all additional voyages conducted at the Rutgers COOL facility, Glenn has seen the significant impact the bringing real time ocean data into the classroom on the undergraduate level. Not only do students get access to the same research equipment and data being used in the field by oceanographers, but they form international relationships and go back in to society and their classrooms spreading the word on the critical importance of ocean research. At the time of the Deep Water Horizon Oil Spill, lessons and procedures put in place for the Scarlet Knight voyage and the COOL research and education activities immediately were applied to a real world disaster.

“We want students to continue getting hands-on marine science experience,” Glenn said at the OOI meeting. “The EPE IO will look at how we put OOI data in the hands of the undergraduate students who want to continue to do this work. We’re really excited to be part of this OOI team and to continue to do that.”

The traditional way to teach oceanography was to build a lab at the water’s edge, Glenn said, noting that the concept behind the establishment of COOL was to bring the oceanography lab onto the campus and embed education into ongoing and real time data collection and research. He sees that same vision for the EPE component of OOI.

A goal of the EPE team is to enable such educational experiences and integrate the OOI science and engineering data with investigative learning, Glenn said. The team intends to build on a suite of data visualization tools and capitalize on the availability of interactive, social networking and archival resources.  Glenn added he envisions the EPE IO will be able to enhance the overall OOI capacity for engaging a diverse group of users.

The OOI, a project funded by the National Science Foundation, is planned as a networked infrastructure of science-driven sensor systems to measure the physical, chemical, geological and biological variables in the ocean and seafloor. As a fully integrated system, OOI will collect and disseminate data on coastal, regional and global scales. Through a unique cyberinfrastructure, OOI will make ocean observing data available to anyone with an internet connection. Greater knowledge of the ocean’s interrelated systems is vital for increased understanding of their effects of biodiversity, climate change, ocean and coastal ecosystems, environmental health and climate.