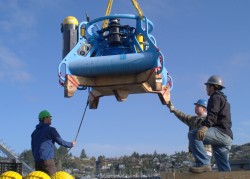 The Ocean Observatories Initiative (OOI) program conducted the first step in testing surface moorings in the ocean off the coast of Oregon and Washington as part of the overall OOI program to deploy a networked infrastructure of science-driven sensor systems to measure the physical, chemical, geological and biological variables in the ocean and seafloor.

Under the current plan OOI will deploy two surface moorings in 25 meters of water off the coast Newport, Ore., and Grays Harbor, Wash., as part of the Endurance Array component of the OOI program. These moorings are designed to collect continuous ocean observations over the inner-shelf for the projected 25-year lifespan of the OOI program.

As part of the OOI development process, the Coastal & Global Scale Nodes (CGSN) Implementing Organization is currently conducting a field engineering and verification test, In Shore Mooring Test 2 (ISMT2), examining a number of mooring subsystems during the spring and summer of 2011.

At-sea observations will be used to assess the static and dynamic performance of the ISMT2 buoy and evaluate the final candidate design. Woods Hole Oceanographic Institution and its partners, Oregon State University and Scripps Institution of Oceanography are responsible for the coastal and global moorings and their autonomous vehicles for the OOI program.

In these shallow water depths, waves have the potential to break at the mooring location during large storms, which can pose a significant challenge to mooring survival. The 25 meter Endurance Array moorings have enough net buoyancy to prevent them from submerging during strong wind and current events or during high tides.  However, the net buoyancy is low enough to allow the buoys to submerge during extreme wave events in order to limit the total mooring tension.

A group of CGSN scientists, engineers and observers joined the captain and crew of the Research Vessel Wecoma on March 19 for a short cruise working out of Newport, Ore.   The deployment location is just south of Yaquina Head and shallow enough to allow scientists to dive on the mooring to evaluate the mechanical subsystems and progressive biofouling of instruments. The mooring was successfully deployed and the engineering test data are being transmitted back to shore via a cellular modem. The mooring will be recovered later this summer, concluding this engineering test.

The OOI Program is managed and coordinated by the OOI Project Office at the Consortium for Ocean Leadership, in Washington, D.C., and is responsible for construction and initial operations of the OOI network.