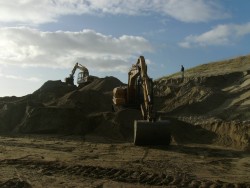 The Ocean Observatories Initiative (OOI) Project in February began installation of the power and data undersea cable at Pacific City, Ore., for the cabled component of the OOI that ultimately will link scientists and others in the OOI user community to data streaming from observing sensors in the ocean.

This work is a significant step forward in development in the OOI Project to build a fully integrated system collecting data on coastal, regional and global scales. The Regional Scale Nodes of network ocean observing sensors in the Northeast Pacific Ocean will be interconnected with approximately 500 miles of electro-optical cable and designed to operate continuously for 25 years.

Each primary instrumented site will be provided with 10 gigabits per second of telecommunications bandwidth and 10 kilovolts of power. Data will be collected from the sea surface to the seafloor and transmitted to shore in near-real time via the Internet.

The first step in the installation process involved drilling a small conduit (~0.2 m in diameter) under the beach to an offshore location (~0.9 miles seaward) at Pacific City. The cable will pass through existing conduits from the beach to onshore power station. Horizontal directional drilling (HDD) is a common technique used to install cables, pipelines, fiber-optic ducts and other types of buried infrastructure under environmentally sensitive

areas or technically difficult sites. A major advantage of HDD is the considerable reduction of impacts that are generally associated with surface (trench) installations.

The HDD operations, which started on Feb. 7, are slated to take place over a 60 to 80 days. Primary cable installation is slated to begin this summer.

The University of Washington (UW) has contracted with L3 Maripro Inc. (L3) for the design and build of the OOI RSN primary infrastructure.  L3, a company based in Goleta, Calif., is a leading provider of undersea cabled sensor systems and through-water communications for undersea defense, hydro-acoustic monitoring, and ocean science applications.

HDD operations at Pacific City have been subcontracted to The HDD Company, also based in California. Throughout the HDD operations, representatives of both L3 and the University of Washington will be continuously on site to monitor working conditions and to ensure that the best level of performance and safety standards are achieved.

The OOI Project, funded by the National Science Foundation (NSF), is planned as a networked infrastructure of science-driven sensor systems to measure the physical, chemical, geological and biological variables in the ocean and seafloor. One fully integrated system, OOI will collect data on coastal, regional and global scales. OOI will put ocean observing data in the hands of a vast user community of oceanographers, scientists and researchers, educators and the public. Greater knowledge of the ocean’s interrelated systems is vital for increased understanding of their effects of biodiversity, climate change, ocean and coastal ecosystems, environmental health and climate.

The OOI Program is managed by OOI Project Office at the Consortium for Ocean Leadership in Washington, D.C. Three implementing organizations are responsible for construction and development of the overall program. Woods Hole Oceanographic Institution and its partners, Oregon State University and Scripps Institution of Oceanography are responsible for the coastal and global moorings and their autonomous vehicles. The University of Washington is responsible for cabled seafloor systems and moorings. The University of California at San Diego is implementing the cyber infrastructure component.