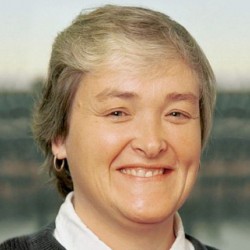 Deborah Kelley, professor of oceanography at the University of Washington and associate director for science for the Regional Scales Nodes (RSN) component of the Ocean Observatories Initiative (OOI), presented a lecture on the OOI program in April as part of the University of Rhode Island (URI) Vetlesen Lecture Series on the “State of the Oceans.”

Kelley’s presentation, “Bringing the Internet to the Oceans,” took place on the URI Kingston campus and was presented in conjunction with the 50th anniversary of the Graduate School of Oceanography. Her talk focused on the research and educational potential of the OOI.

Kelley is internationally known for her work on submarine volcanoes and how they support life in the absence of sunlight. She has led dozens of oceanographic research expeditions to the seafloor around the world, including hydrothermal vent fields on the Mid-Atlantic and the Juan de Fuca Ridges. She discovered the novel Lost City Hydrothermal Field, the study of which has changed theories on the origin of life. She earned Bachelor’s and Master’s degrees from the University of Washington and a doctorate from Dalhousie University in Nova Scotia.

The lecture series is sponsored by the G. Unger Vetlesen Foundation, with individual lectures supported by the URI College of Arts & Sciences, the Harrington School of Communication and Media, and Rhode Island Sea Grant.

The OOI, a project funded by the National Science Foundation, is planned as a networked infrastructure of science-driven sensor systems to measure the physical, chemical, geological and biological variables in the ocean and seafloor. The OOI will be one fully integrated system collecting data on coastal, regional and global scales. Greater knowledge of the ocean’s interrelated systems is vital for increased understanding of their effects on biodiversity, ocean and coastal ecosystems, ecosystem health and climate change. OOI will put real time ocean observing data in the hands of a vast user community of oceanographers, scientists and researchers, educators and the public.

For more on the University of Washington’s work as an Implementing Organization for the OOI click here.