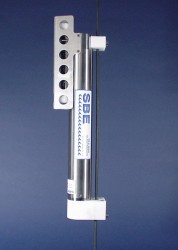 The first thing a Mother may do when a child gets sick is reach for a thermometer out of the medicine cabinet. For decades this simple instrument has provided a reliable and relatively easy way to collect data on human health. Similarly, it’s possible to monitor the ocean’s health by collecting information on temperature and other qualities like saltiness, or salinity.

Like the thermometer, methods for collecting data about the ocean have been around for many years. In fact, measurement of temperature and salinity throughout the water column (i.e., from sea surface to seafloor) has been a focal point of oceanography since the late 19th century.  The first instruments to record temperature at depth in the ocean were not much more than clever adaptations of mercury thermometers, the same used to measure a fever in a child.  These adaptations often included an attached bottle to collect a water sample to analyze for salinity.  Water samples then had to be processed back in the laboratory, a very time consuming process.  Through time, technologies to measure both temperature and salinity improved in precision and ease of use.  Advancements in these individual sensors culminated in 1969 with the invention of the microprofiler, or CTD, by Neil Brown at Woods Hole Oceanographic Institution.  The CTD allowed for the simultaneous and instantaneous measurements of Conductivity (which can be converted to salinity), Temperature and Depth (derived from measurement of pressure), giving it its name CTD.

In March 2011, the Consortium for Ocean Leadership and the National Science Foundation awarded a contract to Sea-Bird Electronics, Inc., of Bellevue, WA for design, testing and production of CTD instruments for the OOI program.  The CTD instruments will play a key role in both the Coastal Global Scale Network (CGSN) and Regional Scale Node (RSN) components of the OOI, as they will enable continuous monitoring in near real time from several moored locations within the array structure at each location. CTD instruments will be deployed on a variety of fixed platforms including surface moorings at the sea surface and benthic sensor packages resting on the seafloor.

Temperature and salinity are accurate measurements easily made with today’s technology and used to address complex questions, including: ocean storage of atmospheric carbon dioxide (CO2), ocean acidification (measured as pH), predictions of storm events, mixing within the ocean water column, and fluxes of heat from the seafloor into the overlying water.  These sensors provide greater insight into ocean phenomena as they will be in the water for more than a year, continuously collecting data, allowing scientists to examine episodic events on the time scale of minutes and hours as well as much longer decadal processes.  At OOI, we are very excited about the addition of the Seabird CTDs. For more information please see the Contract News Release.