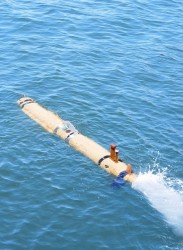 WHOI, an implementing organization on the OOI Program, awarded the contract for approximately $1 million to Hydroid for initial development and design modification of AUV systems to meet OOI specifications. Subsequent phases of the contract will lead to the delivery of production AUVs that will be used to collect data as a part of the OOI Pioneer Array located off the New England coast.

The Pioneer Array spans the continental shelf-break, where water depths drop quickly from about 100 meters to greater than 500 meters over a distance of about 40 km.  The shelf break is a region of energetic and important ocean variability, a boundary region between cool coastal waters and warmer offshore and Gulf Stream waters.  Biological productivity and variability are strong, and a goal of the Pioneer Array is to understand the interplay of physical and biological processes across many scales, from hundreds of meters to hundreds of kilometers. The Pioneer Array AUVs will be dedicated to sustained operation in the vicinity of the shelf break, with each vehicle capable of making more than 50 missions per year in water depths up to 600 m.

“AUVs are a critical tool to rapidly sample variability on dynamically relevant scales within the complex frontal system,” said Al Plueddemann, a WHOI senior scientist and project scientist for the Pioneer Array. “This capability is key to improving our understanding of interactions between the continental shelf and slope.”

Mobile platforms like AUVs provide oceanographers with the ability to deploy sensors and move them through space horizontally and vertically. Propeller-driven, battery powered AUVs look somewhat like an instrumented torpedo, though they are optimized for longer life at slower speeds while carrying a sensor payload.  AUVs are able to carry a broad suite of sensors to conduct a diverse variety of observations.  AUVs surface to obtain position fixes using GPS and also will enter the OOI communications network using satellite telemetry.

The OOI, a project funded by the National Science Foundation (NSF), is planned as a networked infrastructure of science-driven sensor systems to measure the physical, chemical, geological and biological variables in the ocean and seafloor. As a fully integrated system, OOI will collect and disseminate data on coastal, regional and global scales. Through a unique cyberinfrastructure, OOI will make ocean observing data available to anyone with an internet connection. Greater knowledge of the ocean’s interrelated systems is vital for increased understanding of their effects on biodiversity, climate change, ocean and coastal ecosystems, environmental health and climate.

WHOI and its partners, Oregon State University and Scripps Institution of Oceanography are responsible for the OOI coastal and global arrays and their autonomous vehicles.

The OOI five-year construction phase began in September 2009, with nearly $106 million of first-year funds coming from the American Recovery and Reinvestment Act of 2009, and $5.91 million in NSF construction funds. Requests in FY 2010 and beyond, totaling $274.58 million for construction, fund the acquisition of OOI instruments and sensors, production of key infrastructure elements such as the coastal and open ocean moorings and the deployment of these assets.

The first years of funding for OOI under the Cooperative Agreement supports a wide range of construction efforts, including production engineering and prototyping of key coastal and open-ocean components (moorings, buoys, sensors), award of the primary seafloor cable contract, completion of a shore station for power and data, and software development for sensor interfaces to the network. Subsequent years of funding will support the completion of coastal, deep-ocean, and seafloor systems, with initial data flow scheduled for early 2013 and final commissioning of the full system in 2015.

About the Consortium for Ocean Leadership

The Consortium for Ocean Leadership is a Washington, D.C.-based nonprofit organization that represents 95 of the leading public and private ocean research and education institutions, aquaria and industry with the mission to advance research, education and sound ocean policy. The organization also manages ocean research and education programs in areas of scientific ocean drilling, ocean observing, ocean exploration, and ocean partnerships.