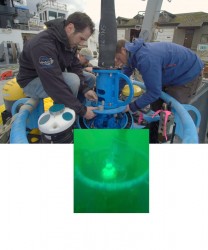 (Click to enlarge) Jeff Pietro (left) and Chris Holm (right) attach the electromechanical stretch hose to the universal joint. Photo Credit: Craig Risien, Oregon State University. The insert in this shot is an underwater photograph taken during a May 11 InShore Mooring Test 2 inspection dive and shows the universal joint and the multi-function node after two months of operation (Photo Credit: Shawn Harper)

This summer, the Ocean Observatories Initiative (OOI) team is testing several instrument platforms planned for the Endurance Array that will provide extensive, sustained ocean observations off the Oregon and Washington coasts to a wide range of users including scientists, educators and the public.

“This is an exciting and busy time for the OOI design teams,” said Bob Collier, Deputy Program Manager for the Coastal Global component of the OOI program responsible for deploying and maintaining the Endurance Array. “As the designs of instrument platforms mature, tests are underway to evaluate a wide range of subsystem elements. All of these test data are crucial as we work toward deployment of this key component of the OOI infrastructure that will revolutionize the way we observe the ocean.”

The Endurance Array will consist of three ocean observatory sites located off Newport, Ore., and another three sites located off Grays Harbor, Wash. These fixed observing platform sites span from the slope at 600 meters, the shelf at 80 meters, to the inner shelf at 25 meters water depth. The Newport Line will also be connected to an undersea fiber optic cable network. The backbone of that undersea cable was brought to shore in Pacific City, Ore., in July.  It will link scientists and others on land to data streaming from next generation sensors located in the ocean and on the seafloor.

The OOI program, funded by the National Science Foundation, is planned as a networked infrastructure of sensor systems that will address vital science questions by measuring physical, chemical, geological and biological variables of the ocean. Oregon State University’s College of Oceanic and Atmospheric Sciences is coordinating development and operation of the Endurance Array.  OSU and Scripps Institution of Oceanography are members of a Woods Hole Oceanographic Institution (WHOI) team responsible for the OOI coastal and global moorings and autonomous vehicles. The University of Washington is responsible for the regional cabled seafloor systems and moorings.

The Northwest Pacific region has drawn considerable interest from scientists because of the increasing frequency of hypoxic, or low-oxygen, events leading to biological “dead zones.” Pacific coastal waters also experience toxic algal blooms, play a role in sequestering atmospheric carbon, and are subject to highly variable levels of biological production that have an impact on the entire marine food web, including salmon populations. An observatory network will also help scientists better evaluate local impacts of the changing global environment such as ocean acidification.

Tests currently underway for the Endurance Array include the deployment of a surface mooring in 25 meters depth off Newport and the deployment of a seabed experiment platform designed to be connected to the regional cabled network through the outer Endurance Oregon Array.  Studying this near shore environment is critical to understanding the impact of waves on the seafloor and shoreline, to characterizing the impact of freshwater inputs to the coastal zone from rivers, and to observing the flow of carbon between the land, sea, and atmosphere.

Collier explained the team is conducting a field engineering and verification test, called Inshore Mooring Test 2 (ISMT2), to examine a number of mooring subsystems during this spring and summer. The mooring, designed and constructed by WHOI and OSU engineers, was deployed March 19, 2011, near Newport.  Divers have inspected the mechanical mooring hardware and validated that the anchor system is not buried in sand in preparation for a successful mooring recovery on Aug. 6, 2011.   At-sea observations are being used to assess the static and dynamic performance of innovative mooring designs that will be incorporated into the final mooring to be deployed in 2013.

Throughout the test, engineering and science test data are regularly transmitted to shore via cellular modem and are made available to the OOI Cyberinfrastructure (CI) team developing the Integrated Observatory Network (ION). This critical CI component will make ocean observing data available to a global community of scientists, researchers, educators and the general public. The CI component is being implemented by the University of California, San Diego and

Rutgers, The State University of New Jersey, is responsible for the education and public engagement software infrastructure.

Among many test objectives, the OOI team has been able to verify the durability of system components including a stretchable electromechanical hose and the operation of electrical systems the extreme conditions of the near shore environment. The team has also assessed the platform’s data acquisition software, telemetry performance, and data transfer. Testing has allowed for further validation of procedures related to deployment and recovery of such moorings and the ability to mitigate complications in doing so in an extreme environment.

The Benthic Experiment Package (BEP), a platform designed to be positioned at the cabled Endurance sites, has also been tested. The BEP is a low-profile, trawl resistant, protective platform for sensors that require high power and bandwidth as well as proximity to the seafloor. The BEP will be serviced by remotely operated vehicles (ROVs) that will connect and recover cabled instruments and platforms from the regional cabled network. The fiber-optic cable that will support the two BEPs is currently being installed at sites offshore of Newport.

The BEP was deployed from the RV Wecoma on Aug. 6 during the recovery of the inshore mooring.  The test focuses on the mechanical stability and hydrodynamic behavior of the package during a range of deployment and recovery scenarios. This test enables the engineers to model transient forces during deployment and better evaluate the ability of an ROV to handle the package.  The tests will allow the team to assess the impacts of biofouling and sediment silting/scouring around the platform base.

Meanwhile, developmental tests will soon be underway on coastal profilers and gliders. Profilers are platforms that repeatedly travel up and down through the upper water column carrying instruments to address critical science and marine environmental issues in the near-surface ocean.  The air–sea exchange of light, heat, momentum, and gases such as carbon dioxide and oxygen are controlled by this uppermost layer of the oceans. The maximum rates of biological production and nutrient cycling are found in the upper ocean where biological, physical and geochemical processes are tightly coupled. A surface-piercing profiler (SPP) is designed to continuously sample at high resolution all the way to and through the critical surface interface.

The development path for the Coastal Surface Piercing Profiler includes a demonstration deployment to research the current market for this advanced technology.  Two vendors will deploy surface piercing profiler prototypes for 30 days off Newport in late August.  A SPP designed for open ocean deployments and a “wire-following profiler” will also be tested this fall as part of a test event known as “At Sea Test 2” (AST2) near the Pioneer Array site in the Atlantic. Other mooring platforms that will be deployed in the coastal and global array sites will also be tested as part of AST2.

The development of gliders for both coastal and open-ocean application is well underway. “First article tests” for the costal glider will begin off the East Coast in November, 2011 followed by final “factory acceptance tests” off Newport near the end of the year.  The final implementation and operation of the coastal glider array will begin as part of the Endurance array in the early summer of 2012.

For more information and to track progress on these exciting test and development efforts please continue to visit our OOI website. Click here to learn more about Gliders and Autonomous Unmanned Vehicles.

Click here to watch a Video on Preliminary Testing for the Benthic Experiment Package.

Click here to read more on the OOI Undersea Cable Installation or track day by day installation coverage at the University of Washington RSN blog here.