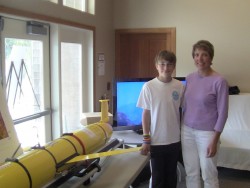 (Click to enlarge) Stephanie Welch and her son Issak Welch check out a glider on display at the Ocean Observatories Initiative Open House in Pacific City, Oregon.

As the Ocean Observatories Initiative (OOI) undersea cable connected the ocean to shore last week in Pacific City, Ore., local residents came out to support the program and embrace the opportunities the OOI program represents for all users of the ocean in that unique coastal community.

“You have a community and county very supportive of this program and we will work with you to make this program a success,” Tillamook County Commissioner Mark Labhart told OOI program scientists and engineers and close to 200 local residents who turned out to learn more about the program at public event held on July 13, a day after the first OOI undersea cable was connected to land just off their local beach in Pacific City.

The OOI is a program funded by the National Science Foundation and is planned as a networked infrastructure of science-driven sensor systems to measure the physical, chemical, geological and biological variables in the ocean and seafloor. On July 12, 2011, the program connected the undersea cable that will link scientists and others on land to data streaming from an extensive array of next-generation sensors located in the ocean and on the seafloor, marking progress in construction of the first U.S. regional cabled ocean observatory.  The first of two submarine cables was pulled to shore on July 12, followed by the second cable on July 15. To read more about the cable installation visit the OOI Website. 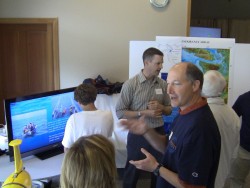 During the three-hour public event, OOI program leaders discussed the global potential for the program to revolutionize ocean research and present unforeseen opportunities in science and education. Program scientists met with citizens and showed off equipment like the specialized gliders that will travel autonomously through the waves collecting ocean observations. Automated displays allowed the visitors to dive to the farthest depths for a close up look at hydrothermal vents on the seafloor not far off their coast.  They were also able to touch the new fiber optic carried buried miles off shore and under the ocean floor that will deliver at the speed of light amazing new ocean data straight to their computers.

Stephanie Welch and son Isaak Welch spent time learning how gliders navigate the ocean waves and challenging currents.  Isaak, who’s interested in becoming a chemist, and his mom said they came to learn more about the interaction between ocean science and chemistry and how the OOI will operate.

“It’s really exciting to see all that has been happening on this program,” Welch said, adding that while her son has seen science-themed movies and presentations in school it’s great to see the real thing live and in their own community.

Gene Johnson, a board member of the Nestucca Valley Community Alliance, said he’s looking forward to promoting the educational aspect of the OOI within the local community educational system.

“The OOI is important to everyone in this community,” Johnson said. “We feel fortunate to be at the epicenter of this project and we can use this program to educate the community on policy and larger issues as well as our youth on what science and education can do for all of us.  We hope to use this program as a mechanism to motivate and educate our young people and help them see that the world is a big place with a lot of opportunity.” 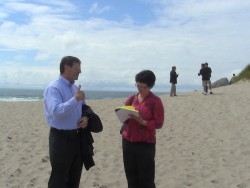 Helaine Koch, a former educator and resident of Tillamook County from the town of Neskowin, also told members of the OOI team that science is very inspiring to everyone in her community.  The idea of introducing the potential for studying the ocean in new and exciting ways has the potential to open doors particularly for the youth of the region, she added.

Alex Sifford, another Neskowin resident who runs a local watershed council, said OOI will provide a tangible connection between activities and exploration on shore and off shore.

Sifford and many others attending the event said they were pleased that representatives from the OOI program have stressed the future educational importance of the OOI.

“The kids here today can really connect to education through computers and hand held devices, and the OOI will bring not just the ocean, but the global community to them through this science,” Sifford added. “There’s nothing like this. Also, the many retirees in this community are interested because they also care very much about preserving the ocean and the community.”

Nancy Burgi-Oleson, a retired educator and speech pathologist who now volunteers in the area, said OOI will bring a new world to many local children who, given their rural location, often don’t have the opportunity to travel far outside of their community.

“There is a real hunger here, especially for any kind of exploration in the Pacific Ocean,” she said. “The educators here are excited to connect science teachers with this new technology.” 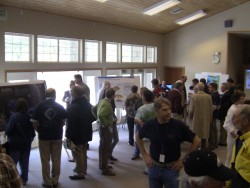 (Click to enlarge) Close to 200 local residents of Tillamook County turn out for a public open house in Pacific City, Ore., where the first undersea cable was installed for the OOI program.

Michael Rech, innkeeper of a bed & breakfast located a few blocks away from the cable manhole site, said he has been watching the preparation of the cable site for months and has been very impressed that it has been resurrected from its former telecommunications use and refurbished for OOI without having any negative impact on the environment. Rech explained he and his wife Laura took a very “green” approach to renovating a house they bought in Pacific City in 2000 that was close to demolition. Today, that house, now the Craftsman Bed & Breakfast, incorporates and encourages guests to adopt energy saving and other planet friendly practices.

The process used to install the OOI cable “had zero impact, or an invisible impact, you don’t even know it’s there,” Rech said.  “We’ll know they’re studying our little slice of the earth but the environmental and visual impact is so low because it’s all underground. There’s nothing more green than using an existing building.”

Several months ago, the OOI team used a Horizontal Direction Drilling (HDD) process to prepare the manhole site and install the cable. HDD is a common technique used to install cables, pipelines, fiber-optic ducts and other types of buried infrastructure under environmentally sensitive areas or technically difficult sites. Two cables are now in place, one that extends to a study site at Hydrate Ridge, approximately 75 miles off the coast of Pacific City and loops back on the continental shelf to the link cable moorings of the Coastal Scale Nodes Oregon Line, a component of the OOI Endurance Array.  A second cable extends 310 miles west to the Axial Seamount study site on the Juan de Fuca Ridge. Each primary instrumented site will offer two-way communication between land and sea and will be supplied with up to 10 gigabits per second of telecommunications bandwidth and 8 kilowatts of power. Data will be collected from the sea surface to the seafloor and transmitted to shore in near-real time via the Internet 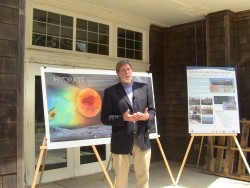 (Click to enlarge) John Delaney, Director and Principal Director of the OOI Regional Scale Nodes and University of Washington Professor of Oceanography, explains the history of the OOI for a group of residents and media interested in the Hydrate Ridge and seismic activity not far off their coast.

With a “ring side seat” to the Pacific Ocean John Delaney, Director and Principal Investigator of the Regional Scale Nodes component of OOI, said this community support is crucial for the future of the OOI where applications for advanced education and technological advancement are limitless.

Tillamook County, he said, “can play an early role in validating the concept of next generation ocean science.”  During his presentation Delany demonstrated how incoming video and data from the OOI sensors could stream via internet into a classroom, but also fit in someone’s pocket on a mobile device like an iPhone.  Unlike satellites that can only monitor ocean surface and ships that can only be in one place at one time, he considers the OOI a true game changer.

“This new technology is going to allow us to be in many places all the time and communicate with the speed of light on fiber optic cable and share all we do all the time on the internet with the public,” Delaney said.

Tim Cowles, Vice President & Director of Ocean Observing at the Consortium for Ocean Leadership, told the Pacific City audience that data gathered from their part of the world holds much larger significance to the global community.

“We’re very grateful to the American taxpayer and the National Science Foundation because without their support programs of this scope would never occur,” Cowles added. “Just like astronomers build large telescopes on a mountaintop, our telescope will have many eyes in the ocean providing visions of what’s happening over many decades.”

The University of Washington is leading the OOI cabled component effort and has contracted with L3 MariPro Inc., Goleta, Calif., for the design and build of the OOI RSN primary infrastructure. The OOI Program is managed and coordinated by the OOI Project Office at the Consortium for Ocean Leadership, in Washington, D.C., and is responsible for construction and initial operations of the OOI network.