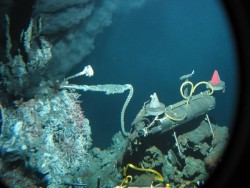 Work began in January 2012 on the design and build of the Ocean Observatories Initiative’s Regional Scale Nodes’ first Core Non-Commercial instrument: a temperature-resistivity probe that will collect data from fluids emerging from seafloor hotsprings in the caldera at Axial Seamount, located at a water depth of ~1500 m (4921 ft). Measuring the temperature and chemistry of hydrothermal vent fluids is a core requirement of the OOI RSN.

There will eventually be several OOI RSN Core Non-Commercial instruments, which are not available as off-the shelf products, but rather must be specially designed to operate for long periods within the deep-sea environment of extreme pressures and temperatures. For example, the temperature-resistivity probe must be capable of making direct measurements of fluids that can reach temperatures of >350°C (662°F). The probe also measures resistivity, as a proxy for chloride concentrations. Boiling is a common process beneath the seafloor at Axial and within fluids issuing directly from the vent orifices. Chloride measurements, therefore, are important to understand phase-separation processes, with implications for understanding metal deposition, gas generation, and microbial ecosystem development.