The Ocean Observatories Initiative (OOI) is back from a successful 2012 Ocean Sciences Meeting in Salt Lake City, Utah.  During the conference, OOI team members held a variety of sessions, posters and information sharing opportunities.  At the OOI booth, team members fielded questions from a variety of enthusiastic visitors and provided demonstrations of the online OOI Instrument Tables.

On Tuesday morning of the conference, OOI Senior Project Scientist Steve Ackleson gave a talk on the history and future directions of ocean observatories.  This was part of a session he co-chaired in collaboration with Ocean Networks Canada, University of Maine, and NEPTUNE Canada on the integrative power of ocean observatories.  You can download a PDF of his talk HERE

In addition to scheduled scientific sessions, the OOI Team held a series of special informational sessions over three days to provide interested attendees with an update on recent OOI activities and opportunities for community involvement. You can download a PDF of that presentation HERE 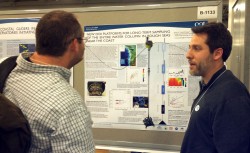 If you missed the meeting and would like to learn more about what is happening in the program, check out the poster links below.

SCIENCE AND DATA PRODUCTS FROM THE OCEAN OBSERVATORIES INITIATIVE

Summary: This poster describes OOI data, products, algorithms, levels of processing, quality control, intermediate products, sampling frequencies, data volumes and data rates.  Several specific examples of data processing are described along with the description of all planned data products.  It introduces the scientific community to the specific products that will be available in this unprecedented opportunity for oceanographic, benthic and air-sea research.

Summary: A suite of computationally simple algorithms for data quality control (QC) is presented that generates pass/fail flags for oceanographic data from moorings. This poster addresses the development and tuning of these algorithms as part of the OOI.

Summary: This poster addresses the OOI sampling strategy that must consider event-driven sampling responses, mitigation of between-sensor interference, data products that require multiple sensors, the need for physical sampling to validate and calibrate OOI sensors, and the eventual incorporation of non-core sensors into the network.

Summary: This year the Ocean Observatories Initiative (OOI) tested platforms for consideration at its 25m depth Oregon and Washington long-term observation sites. This poster addresses assessments of recent tests and plans for platforms for long-term sampling. Results of the mechanical performance of mooring and profilers are shown along with an illustration from these data of the scientific value these paired platforms will provide.

THE ROLES OF COASTAL GLIDERS IN THE OOI

BUILDING A HIGH-POWER AND HIGH-BANDWIDTH CABLED OBSERVATORY ON AN ACTIVE VOLCANO: AXIAL SEAMOUNT

Summary: Axial Seamount is the most active volcano on the Juan de Fuca Ridge, erupting in 1998 and 2011. It is both seismically and hydrothermally active, and hosts diverse biological communities. It is a long-term NOAA-PMEL observatory where long-term co-registered fluid chemistry-temperature-microbiological measurements have been made that begin to quantify the microbial evolution at the decade scale of seafloor eruption cycles. Because of these characteristics, Axial was chosen as the US’s first cabled observatory at a submarine volcano. This 5-year construction and 25-year operational project is part of the NSF’s Ocean Observatories Initiative. This poster addresses the Axial Seamount area and the OOI RSN teams work there.

ANNOUNCEMENT OF THE CORE INSTRUMENT MODELS AND LOCATIONS

Summary: The OOI has selected the vendors and models for many of the 49 Core Instrument Families that will be located on the arrays.  The sensor models and their location-specific features are presented here, with reference to their generalized data product available from OOI’s Integrated Observatory Network data portal.  Approximately 750 instruments are expected to complement the OOI arrays at the time of commissioning.  This poster provides information on core instruments and locations.

Summary: The Columbia River plume is a dominant feature of the Pacific Northwest coastal hydrography. This poster presents the spatial/temporal evolution of low-salinity pulses during June and July 2011. Analysis of in situ data off of Newport collected from OSU autonomous underwater gliders, Ocean Observatories Initiative (NSF funded) and the Northwest Association of Networked Ocean Observing Systems (NANOOS; NOAA funded) moorings, as well as remotely sensed data, show that the on-offshore location of the plume front is not controlled by riverine discharge rates, but rather by Ekman dynamics, and that these freshwater pulses reach the coast.

THE FUTURE OF REAL-TIME MONITORING OF METHANE HYDRATE DEPOSITS AT ACTIVE CONTINENTAL MARGINS: THE OOI CABLED OBSERVATORY AT HYDRATE RIDGE

Summary: Hydrate Ridge is characterized by an extensive system of subsurface gas hydrate deposits, active plumes, and extensive biological communities. Previous studies of its subsurface geology and these seep-supported benthic communities highlighted the need for an integrated, synoptic, and long-term approach to the study of carbon cycling in such continental margins. In 2013, the cabled observatory component of the OOI, known as the Regional Scale Nodes (RSN), will begin deploying an array of seafloor instruments at Southern Hydrate Ridge. The poster discusses RSN’s built-in expandability and 25-year lifetime will provide unprecedented opportunities for long-term high-resolution studies, furthering our understanding of gas hydrates and carbon cycling in such systems and potential global effects associated with tectonic activity and climate change.

Summary: The National Science Foundation’s (NSF) Ocean Observatories Initiative (OOI) is implementing the construction and operation of an interactive, integrated ocean observing network. This presentation will provide information on major advances in OOI construction and an update on overall program plans.