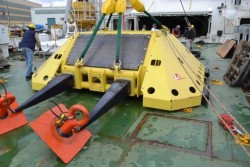 In preparation for OOI RSN primary node deployment in summer 2012, tests of rigging configurations took place on April 17 and 18, 2012 dockside at Swan Island in Portland, Oregon.

The seven primary nodes on the RSN system are terminal points on the main, or backbone, cable, that distribute power (8 kilowatts) and bandwidth (10 Gbits/second) to the secondary infrastructure (sensors, instruments, lower-voltage nodes, full water-column moorings, and wet-mateable connectors for remotely operated vehicles).

One of the primary nodes built by L-3 Maripro, the OOI RSN prime contractor, was offloaded from a flatbed truck on the Swan Island dock and onto the fantail of the cableship TE SubCom Dependable, the commercial telecommunications cableship that will be used to install the primary nodes in July and August 2012. The C.S. Dependable is the same vessel that was involved in the installation of the Regional Scale Nodes primary cable in summer 2011.