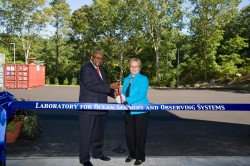 (Click to enlarge) WHOI President and Director Susan Avery is joined by National Institute of Standards and Technology (NIST) Associate Director for Laboratory Programs and Principal Deputy Willie May at a dedication ceremony Sept. 20 for the new Laboratory for Ocean Sensors and Observing Systems. WHOI received an $8.1 million grant from NIST in 2010 to fund construction of the new scientific research facility. The 26,000-square-foot, “green”-designed building will provide space for several different groups creating long-term ocean observing systems, the largest of which is WHOI’s coastal and global scale nodes (CGSN) team of the OOI. The building is tailored to the needs of the team, including the central high bay, built to accommodate tall buoys and with a 10-ton capacity bridge crane for hoisting them. (Photo by Tom Kleindinst, Woods Hole Oceanographic Institution)

The Woods Hole Oceanographic Institution (WHOI) has opened a new state-of-the art Laboratory for Ocean Sensors and Observing Systems that will house work for the Ocean Observatories Initiative (OOI) and other WHOI ocean observing efforts.

The facility officially opened following a dedication ceremony on Sept. 20. The 26,000-square-foot, green-designed building will provide space a WHOI for a major effort to create long-term ocean observatories.

National Standards and Technology (NIST) Deputy Director Willie May joined WHOI President and Director Susan Avery at the dedication ceremony. In 2010 WHOI received an $8.1 million grant from NIST to fund construction of the new scientific research facility, as part of the American Recovery and Reinvestment Act. WHOI contributed $4 million.

“This is an incredible day for the Oceanographic,” Avery said at the ceremony. “Thanks in large measure to the National Institute of Standards and Technology, which had faith in the important ambitions in our proposal, we now have 26,000 square feet of new space for science and engineering activities that have already begun to define the future of how we observe and learn about the ocean.”

The Laboratory for Ocean Sensors and Observing Systems (LOSOS) houses researchers working on the OOI. WHOI is leading the Coastal and Global Scale Nodes component of the OOI, and its team occupies most of the building, including the central high bay, built to accommodate tall buoys and with a 10-ton capacity bridge crane for hoisting them.

Tailored to occupants’ specific needs, the building includes a 15-foot-long tank to allow instrument ballast tests; access pathways to the roof for cables that will carry high-bandwidth data via satellite from deployed instruments; and, in the OBS testing lab, a granite floor slab entirely separated from the rest of the building for testing the seismic instruments without exposure to the vibrations a building produces. Among other features, the building also includes a high-pressure washing station to be used on observing system components recovered from the ocean and cleaned before re-deployment.  The water station will reclaim, filter, and capture runoff liquid and debris before it seeps into surrounding land.

The building incorporates efficiencies, from the 95 percent combustion efficiency boilers, to radiant-heat flooring in the high bay, to energy-saving fluorescent lights directed upward for diffuse, eye-friendly illumination. Ultimately, these enhancements add up to 13 to 14 percent more energy-efficiency than a traditional building.

Scientists and engineers began moving into the new lab in August, the first realization of a goal to bring different ocean-observing groups under one roof, to more easily share and cross-fertilize ideas, and spur innovation.

The OOI, a project funded by the NSF, is planned as a networked infrastructure of science-driven sensor systems to measure the physical, chemical, geological and biological variables in the ocean and seafloor. As a fully integrated system, OOI will collect and disseminate data on coastal, regional and global scales. Through a unique cyberinfrastructure, OOI will make ocean observing data available to anyone with an internet connection. Greater knowledge of the ocean’s interrelated systems is vital for increased understanding of their effects on biodiversity, climate change, ocean and coastal ecosystems, environmental health and climate.