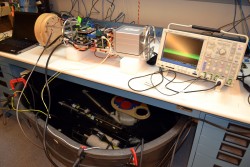 (Click to enlarge) Junction Box test setup: On the bench is the open-frame prototypte of the low-power junction box. To the right is an osciloscope for signal monitoring. The junction box is connected to the three first-article instruments submerged in freshwater in the tank beneath the bench. (Photo by Mitchell Elend, University of Washington)

In September 2012, the RSN Junction Box engineering team* at the UW Applied Physics Laboratory achieved an important milestone: they conducted interface testing after connecting a prototype of a low-power junction box to three standard oceanographic instruments planned for deployment on the RSN system.

The low-power junction boxes are one of three types of secondary nodes that serve as a bridge between the RSN instruments and the Primary Infrastructure. The primary nodes provide 10Gb/s interfaces and 8KV power from the shore station. The Secondary Nodes are comprised of low- and medium-power junction boxes and low-voltage nodes, and these nodes convert the 1 Gb/s bandwidth and 375dc voltage interfaces from the Primary Nodes to the native interfaces needed by the scientific instruments. Each instrument has its own unique interface that handles power and communications with the junction box. Each junction box provides up to eight instrument ports that can be configured for 12, 24 or 48V and 10/100BASE-T, RS232 or RS485 data links. Nodes can be daisy-chained, thereby creating extensive expansion capabilities.

The three instruments connected during the testing were: a Vertical Acoustic Doppler Current Profiler (VADCP), a Conductivity-Temperature-Depth (CTD) instrument, and a pressure sensor. The goal was early identification, before full production begins, of any communications or power interface issues between the junction box and the scientific instruments.

(Click to enlarge) Secondary nodes will connect to the primary nodes and transfer power and bandwidth to sensor networks. They are scheduled for deployment in 2013 using an ROV. (Graphic credit: OOI RSN and Center for Environmental Visualization, University of Washington)

Mike Harrington, the APL senior engineer leading work on the RSN secondary nodes, explained that the three instruments in this test were all first articles–the first unit received from a vendor–and that each had already been accepted after passing tests in the saltwater tank in the Ben Hall Laboratory.

One of the important discoveries made during testing was that the VADCP had a larger-than-expected inrush current when it was turned on, higher than the electronics could accommodate. A solution was found to reduce the inrush current yet allow the VADCP to start up properly. The CTD and pressure sensor each performed as expected and ran continuously for over two weeks as part of the testing.

Next step is for the junction box to go through formal First Article testing. In spring 2013, it will be integrated on its deployment frame with all attached instruments and will go through final integration testing in preparation for deployment in summer 2013. 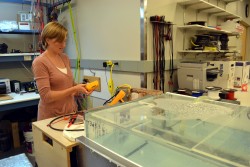