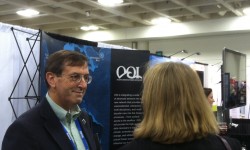 The OOI team held an informational session Wednesday evening at the nearby Serrano Hotel led by Tim Cowles, Vice President & Director of Ocean Observing at the Consortium for Ocean Leadership.  Attendees were provided with an update of recent OOI progress and accomplishments as well as a Q&A session on the 2013 and 2014 deployment schedule.  The session sparked an engaging conversation regarding the streams of data scheduled to begin in late 2013.

“We are excited that a significant number of OOI platforms will be deployed in 2013, with instruments distributed from the sea surface to the seafloor at several of the OOI sites,” said Cowles.  “The data from those instruments will be readily available to users in late 2013 – and represent the first phase of data delivery from the OOI.  I encourage users to stay informed about these deployments and data developments through the OOI website.” 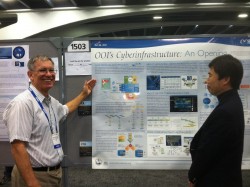 At the OOI booth, team members fielded questions from a variety of enthusiastic visitors and provided demonstrations of the online OOI Instrument Tables and the deep-sea exploration XBOX video game DEEP.

“It was inspiring to talk to so many young researchers who are interested in having access to the OOI and using the data in research throughout their careers,” says Megan Gibney, OOI Program Specialist.  “Our goal at the OOI is to provide data to the scientific community for decades and this next generation of ocean researchers will be a big part of that.”

In addition to streaming data, the OOI Education and Public Engagement team will construct a series of software tools and a web-based social network that leverages the OOI Cyberinfrastructure to support engagement of a wide range of users. These tools will enable educators and developers to enhance their undergraduate education programs and engage free choice learners using real-time and streaming data provided by the OOI.  Several posters and talks at AGU focused on highlighting these opportunities to integrate the OOI into the classroom. 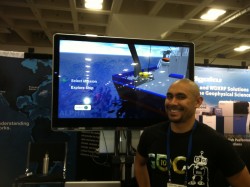 Those interested can track progress of the OOI by visiting the OOI Website or signing up for the OOI Newsletter (e-mail ooi-newsletter@oceanleadership.org with “Subscribe” in the header). Detailed information on the OOI equipment and sensors and their date products can be found on the OOI Instrument Table Section of the website as well. Click here to see an OOI Station Map.

If you missed the meeting and would like to learn more about what is happening in the program, check out the poster links below. 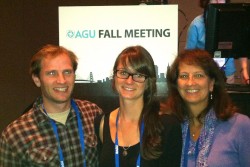 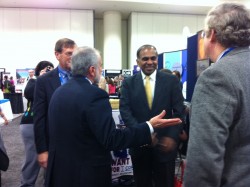