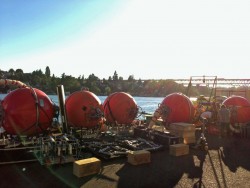 (Click to enlarge) Station Papa Flanking and Hybrid Profiler moorings at the dock in Seattle being tested before loading onto the R/V Melville. Photo (Credit: Taylor Semingson, Scripps Institution of Oceanography)

The Ocean Observatories Initiative (OOI) program this month will deploy the first global site of the OOI infrastructure at the Station Papa location in the Gulf of Alaska.

A team lead by the Scripps Institution of Oceanography at UC San Diego, with their partners at the Woods Hole Oceanographic Institution, is scheduled to embark on an approximately two-week cruise starting on July 15 to deploy this equipment. The cruise, on the Scripps/U.S. Navy Research Vessel (R/V) Melville will depart and return from the University of Washington dock in Seattle, WA. The team will deploy one Global Hybrid Profiler Mooring, two Mesoscale Flanking Moorings and three Global Gliders. There will be a total of 57 instruments deployed.

The global component of the OOI design includes a network of moorings at critical, yet under-sampled, high-latitude locations such as the Station Papa site in the North Pacific.  The array will be composed of a subsurface Global Hybrid Profiler Mooring made up of two types of profilers: a surface piercing profiler operating from ~150 m to the surface, allowing satellite data telemetry, and two wire following profilers, one operating from 310 m to 2,170 m and the other from 2,195 m to 4,060 m. A prototype Global Surface Piercing Profiler will be deployed as part of the Hybrid Profiler Mooring during this cruise. 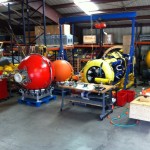 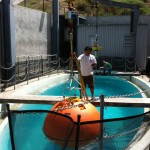 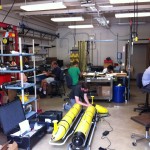 The two subsurface Mesoscale Flanking Moorings will be deployed to form a triangular array ~40 km on a side. These flanking moorings have their uppermost flotation and sensors at ~30 m depth and instruments at discrete depths along the mooring line. Gliders equipped with acoustic modems to relay data to shore via satellite telemetry will sample within and around the triangular array. These gliders will carry sensor suites with the capability to alter sampling rates during a mission.

In addition to mid-summer deployments at Station Papa, the OOI program has phased deployments planned for the Endurance Array and Pioneer Array for early and late fall. Currently a University of Washington led team is conducting critical at sea work on the cabled observatory component of the OOI in the northeast Pacific Ocean. To follow activities of that cruise on the R/V Thompson please visit the UW Interactive Oceans website here.

As the OOI moves into 2014 phase, two deployments will take place for Pioneer and Endurance, and in the fall of 2014, final construction will take place at those locations.  The global deployment in the Irminger Sea is scheduled for the summer of 2014. The two other global sites are scheduled for deployment in late fall 2014 and early winter 2015 in the Argentine Basin and Southern Ocean at 55 South. The construction phase of the program officially ends in 2015.