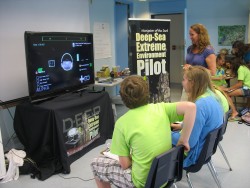 Birch Aquarium campers had an opportunity to explore the ocean virtually while playing OOI’s Deep-sea Extreme Environment Pilot (D.E.E.P.) video game at “So You Want to be an Oceanographer?” Summer camp sessions in July and August.

The week-long camp gives kids a glimpse into ocean science research at Scripps Institution of Oceanography by allowing them to visit scientists in their labs and take part in numerous hands-on experiments and activities related to marine science.

Not many people get the chance to pilot a Remotely Operated Vehicle (ROV) in the deep sea, but the D.E.E.P. educational video game allows players to do just that. D.E.E.P. was developed by a group at Scripps Institution of Oceanography and the Birch Aquarium on the Microsoft Xbox360 platform.  Development was funded by the University of California, San Diego (UCSD) as part of their institutional contribution to the NSF-funded OOI program. The players learn through a video game experience how dark the deep ocean is, how sonar can be used to detect animals, fish and ocean bottom features, and how important it is to complete research tasks quickly and efficiently before the ROV’s state of health becomes critical. The Birch Aquarium campers also tested out a beta version of the new “Ocean Observatory” level of the game, where players are tasked with navigating to ocean observatory nodes.

“The campers clearly enjoyed the video game,” reflected Debi Kilb, Associate Project Scientist at Scripps Institution of Oceanography. “One girl said ‘I wish we could play video games like this one in school too!’ The hope is that that wish becomes reality as more teachers adopt educational video game technologies in their classes.”

The OOI, a project funded by the National Science Foundation, is managed and coordinated by the OOI Program Office at the Consortium for Ocean Leadership, in Washington, D.C., and is responsible for construction and initial operations of the OOI network.