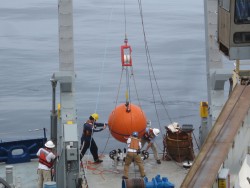 Marking a major milestone, the Ocean Observatories Initiative (OOI) program in July successfully deployed the first global site of the OOI infrastructure at the Station Papa location in the Gulf of Alaska. Detailed cruise information can be found in the Station Papa Deployment Cruise Report.

A team led by the Scripps Institution of Oceanography at UC San Diego, with their partners at the Woods Hole Oceanographic Institution, embarked on a cruise starting on July 15 to deploy this equipment. The cruise, which concluded on July 29, took place on the Scripps/U.S. Navy Research Vessel (R/V) Melville. The vessel departed and returned to the University of Washington dock in Seattle, WA.

During the cruise, the OOI team deployed one Global Hybrid Profiler Mooring, two Mesoscale Flanking Moorings and three Global Gliders. A total of 57 instruments were deployed.

Extensive on-site testing during the cruise ensured that all equipment was functioning and properly relaying data for test purposes, both acoustically and via satellite, before the ship departed the site, according to Professor Uwe Send, of Scripps and the chief scientist of the expedition. The OOI team is in the process of monitoring the instruments and gaining experience with their remote use and operation, and will make more information available when possible on the OOI Website.

This cruise marks a major step in deploying a critical component of the OOI program and has been several years in the planning and development stages.

“The Station Papa deployment is an exciting milestone in the OOI program. This high-latitude installation is the first of our planned global deployments, and will provide continuous observations at a historically-important location in the North Pacific,” said Tim Cowles, Vice President & Director of Ocean Observing at the Consortium for Ocean Leadership. “With this first major OOI deployment we are initiating the shift in ocean research capabilities and data availability that the OOI will bring to our community of ocean scientists, educators, and policy makers.”

The OOI team at Scripps Institution, led by Send, worked for over a year to build and test the many components of the infrastructure deployed during the cruise.  The lead up to the deployment cruise demanded the full attention of Send and a highly skilled team across the OOI.

“There were many issues we had to deal with in the run-up phase to the cruise and during the cruise itself, and it is only thanks to the extremely hard work and professional execution of my team and of the additional cruise participants from Woods Hole and Halifax, that we managed to leave in place a functioning array,” Send said, noting that it was very gratifying to see that after the deployments the team could retrieve data.

“We could acoustically retrieve data from all sensors of the flanking moorings and from the wire-crawling profilers, and that we could communicate via Freewave (wifi-like) and satellite to receive data and re-program the upper-ocean profiler. In several cases this involves handling by and communication between two controllers and passing data inductively along the mooring wire,” Send said. “Overall, there is a lot of infrastructure in the water at the PAPA site now and we needed to be very alert about avoiding gliders and moorings in this 40km size region of the ocean during our extensive operations.”

The global component of the OOI design includes a network of moorings at critical, yet under-sampled, high-latitude locations such as the Station Papa site in the North Pacific.  The array is composed of a subsurface Global Hybrid Profiler Mooring made up of two types of profilers: a surface piercing profiler operating from ~150 m to the surface, allowing satellite data telemetry, and two wire following profilers, one operating from 310 m to 2,170 m and the other from 2,195 m to 4,060 m. A prototype Global Surface Piercing Profiler was deployed as part of the Hybrid Profiler Mooring during the cruise.

The two subsurface Mesoscale Flanking Moorings were deployed to form a triangular array ~40 km on a side. These flanking moorings have their uppermost flotation and sensors at ~30 m depth and instruments at discrete depths along the mooring line. Gliders equipped with acoustic modems to relay data to shore via satellite telemetry will sample within and around the triangular array. These gliders will carry sensor suites with the capability to alter sampling rates during a mission.

The design and implementation of the Station Papa site has been a large team effort across the OOI.
John Trowbridge, an OOI Co-Principal Investigator at WHOI said, “This is the first Coastal and Global Scale Node deployment and was successful thanks to the dedicated work of the design and production teams, the chief scientist and science party, and the ship’s captain and crew.” 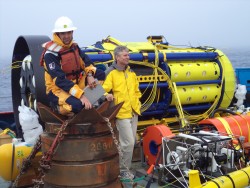 In addition to mid-summer deployments at Station Papa, the OOI program has phased deployments planned for the Endurance Array and Pioneer Array for early and late fall. Currently a University of Washington led team has conducted critical at sea work on the cabled observatory component of the OOI in the northeast Pacific Ocean.

As the OOI moves into 2014 phase, two deployments will take place for Pioneer and Endurance, and in the fall of 2014, final cons 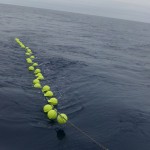 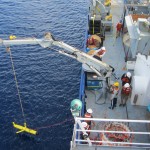 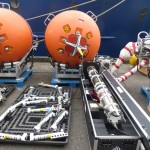 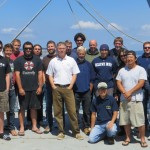 truction will take place at those locations.  The global deployment in the Irminger Sea is scheduled for the summer of 2014. The two other global sites are scheduled for deployment in late fall 2014 and early winter 2015 in the Argentine Basin and Southern Ocean at 55 South. The construction phase of the program officially ends in 2015.