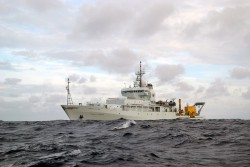 (Click to enlarge) The VISIONS’13 expedition is scheduled to take place in July and August on the R/V Thompson shown above. A University of Washington-led team will do considerable at sea preparation work during the cruise for future installation of the secondary infrastructure on the Ocean Observatories Initiative’s cabled observatory in the northeast Pacific Ocean. (Credit: Allison Fundis, University of Washington, 2011)

Leg 4 of the VISIONS ’13 cruise is now underway in the NE Pacfic Ocean and is streaming continuous live video of operations here.

The expedition is part of the National Science Foundation’s Ocean Observatories Initiative and the goal is to install infrastructure for the first U.S. regional cabled ocean observatory. Primary work sites are the Axial Seamount underwater volcano, and Southern Hydrate Ridge, an area of actively venting methane seeps on the continental shelf off Oregon. Watch over the shoulders of OOI scientists and engineers as they use an underwater robot, ROV ROPOS, to conduct their work at sea.

The OOI, a National Science Foundation-funded program, is managed and coordinated by the OOI Program Management Office at the Consortium for Ocean Leadership in Washington, D.C. Please continue to visit the OOI Website  and the UW Interactive Oceans Website and for updates from the Visions ’13 Cruise and other status reports on the OOI.