(Click to enlarge) The Deep Profiler vehicle being installed on the mooring cable at the Friday Harbor test site. The FHL Pump House, which contains the power supply and other shore equipment, is shown in the background.

A prototype of the RSN deep profiler (DP) system was installed on November 18, 2013, for an extended test deployment at the University of Washington Friday Harbor Laboratories (FHL).

(From Interactive Oceans / By Tim McGinnis, Deep Profiler Lead Engineer) — Full functionality was verified at the 36-meter-deep Friday Harbor test site. The system collected profiles of chemistry, temperature, and other oceanographic properties; engineering and scientific data were transmitted until January 8, 2014. The system was then recovered and brought back to the UW Applied Physics Laboratory for further testing and for integration of a spectrophotometer that was not available at the time of the initial deployment. After the instrument is integrated and tested, the DP system will be re-deployed for further testing.

Developed by a team of RSN engineers at the UW Applied Physics Laboratory in collaboration with RSN scientists, the DP system is designed to collect profiles in water as deep as 3000 meters.

The DP system is one of two types of RSN state-of-the-art paired (shallow and deep) high-bandwidth moorings. The moorings will be cabled to the network’s Primary Infrastructure and will provide public access to real- and near-real-time data over the Internet. 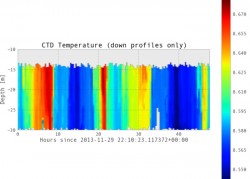 Plans call for a total of six systems (two of each type) to be installed in summer 2014 at three different science sites that span water depths from 2900 meters to 600 meters: at the base of the Cascadia Margin, in shallower waters along the Oregon margin west of Newport, and at the base of Axial Seamount.

The DP system includes a modified McLane Mooring Profiler (MMP) vehicle that uses a motor traction drive to profile from near the sea surface to the seafloor along a tensioned mooring cable with a subsurface float. The DP engineering team from the APL Ocean Engineering Department has modified the MMP by adding a rechargeable battery pack; additional instruments; an APL controller to manage the instrument interfaces, data time stamping, engineering and science data communications; and the capability to install or remove the MMP from the mooring cable by a remotely operated vehicle (ROV).

The profiler vehicles will be replaced with identical vehicles every year for maintenance, instrument calibration, and other maintenance tasks. The ROV-removal capability allows for the annual “turns” to be accomplished without the need to recover the entire mooring or to disconnect the dock from the RSN cables.

(Click to enlarge) An 8-hour record of profiler vehicle depth vs. time was sent out automatically in a daily report from the RSN Observatory Management System (OMS).

During the week of November 4, the prototype DP system was tested from the R/V Robertson by suspending an anchor on a mooring cable from the vessel A-Frame and then moving the DP vehicle profile up and down the mooring cable. This very valuable exercise was the first opportunity for the profiler vehicle to be able to travel any significant distance on a mooring cable, to move in and out of the battery charging dock, and to test the inductive and Wi-Fi communications in the final configuration. The APL Ocean Engineering Department RSN team* and a McClane engineer were on board, testing the complete system, confirming the fit of the charging dock couplers, and finding and fixing software issues that had been difficult to test in the lab.

Installation and Testing at Friday Harbor 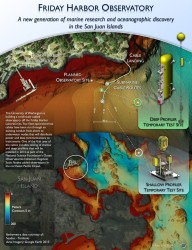 (Click to enlarge) A new generation of marine research and oceanographic discovery in the San Juan Islands.

During the week of November 18, the DP system mooring was installed for an extended test deployment at the UW Friday Harbor Laboratories (FHL) in a water depth of 36 meters. The DP system was connected to an on-shore power supply and the FHL-UW network by an existing electro-optic cable that is part of the planned Friday Harbor Observatory. Once the DP system (anchor, mooring cable, subsurface float, charging dock, profiler vehicle) was installed, the engineering team on board the R/V Robertson remained on station for a day conducting tests: the DP vehicle was commanded and monitored through the fiber-optic cable to confirm full functionality.**
When full functionality was verified, the vessel and team returned to Seattle. The engineering data was transmitted and archived in the RSN Observatory Management System (OMS) and the science data was transferred and archived on an FTP site, where the data is available for RSN engineers, scientists, and cyberinfrastructure developers to access.