Home :: Science ::Science Highlights ::Following the eruption and evolution of a submarine volcano live: The 2015 Eruption of Axial Seamount

An outstanding RCA science success has been the unprecedented insights into submarine volcanism (which accounts for >70% of the volcanism on Earth) through cabled instrumentation at Axial Seamount [1-5; 10-22]. It is the only place in the oceans where numerous processes operating prior to, during, and following a submarine eruption are captured live through data streaming from a diverse array of >20 cabled seafloor instruments. Axial Seamount, located >300 miles off the OR coast at a water depth of 1500 m, is the most active volcano on the Juan de Fuca Ridge having erupted in 1998, 2011, and 2015 [6-9]. In the first year of RCA operations (2014), nearly 200,000 local earthquakes were detected [18]. In the 3 months prior to the 2015 eruption, ~60,000 earthquakes were located in the caldera (Fig 1b [18]). Beginning in March 2015, the RCA seismic array detected an increase to >3000 earthquakes/day, correlated to lunar tides (Fig. 1c [18]). On April 24, 2015 tremor began marking magma movement and 6 hours later a seismic crisis occurred (~0420 UTC) [18]. This event marked the onset of a large eruption with > 8000 earthquakes over 24 hours, documenting the opening and migration of fissures in the caldera and northern rift zone that extended 20 km north of the caldera (Fig. 1c [8,10,14,18-19]). At ~0615 UTC, the RCA bottom pressure tilt instruments recorded a rapid drop in the seafloor, which over the 24 hours totaled ~2.4 m [14]. At 0801 UTC April 24, the seismic network began detecting ~37,000 impulsive events in the water column, reflecting submarine explosions (Fig. 1b [10,18]). Seafloor mapping and ROV dives showed that these explosions were coincident with lava flows in the caldera and flows along the northern rift zone that were up to 127 m thick (Fig. 1a, d) [2,8,16]. On April 27, temperature sensors detected a rise in near bottom temperatures in the caldera with injection of warm, saline fluids from the subsurface [10,20]. From ~May 1-20, RCA hydrophones recorded long-duration diffusive signals consistent with fountaining of gas-rich lavas, similar to Hawaiian style eruptions, and ash formation; follow-on cruises documented ash on some RCA instruments [10]. On May 21, explosions along the northern rift system stopped, and the caldera floor began to re-inflate [18]. Dives 3 months after the eruptions documented acres of microbial mats covering the warm lava flows and ejection from the subsurface of hyperthermophilic microbes into the water column (Fig. 1 e [2, 16]). Bottom pressure- tilt instruments now show reinflation of the volcano coincident with increased seismic activity. Results from these instruments are allowing the first predictions to be made of when a submarine eruption will occur [21].

It is important to note that Axial Seamount has become a critical research communities’ experimental site to examine seafloor volcanism along a mid-ocean ridge. Since 2016, >$15M (exclusive of ship-ROV costs) in awards from NSF, the Office of Navy Research, and NASA have been made to >30 researchers to add infrastructure onto the RCA at Axial Seamount and to conduct science. Awards span the development of new technologies for geodectic studies at Axial and with future application to monitoring deformation in subduction zones [21-23], quantitative measurements of heat flux through multibeam sonar imaging of plumes [24], and energy extraction. The NASA Exobiology multi-year award includes the cabled installation of three raman laser systems and stereo cameras in the ASHES hydrothermal field for advancing life detection and exploration strategies at other watery bodies [25-26]. 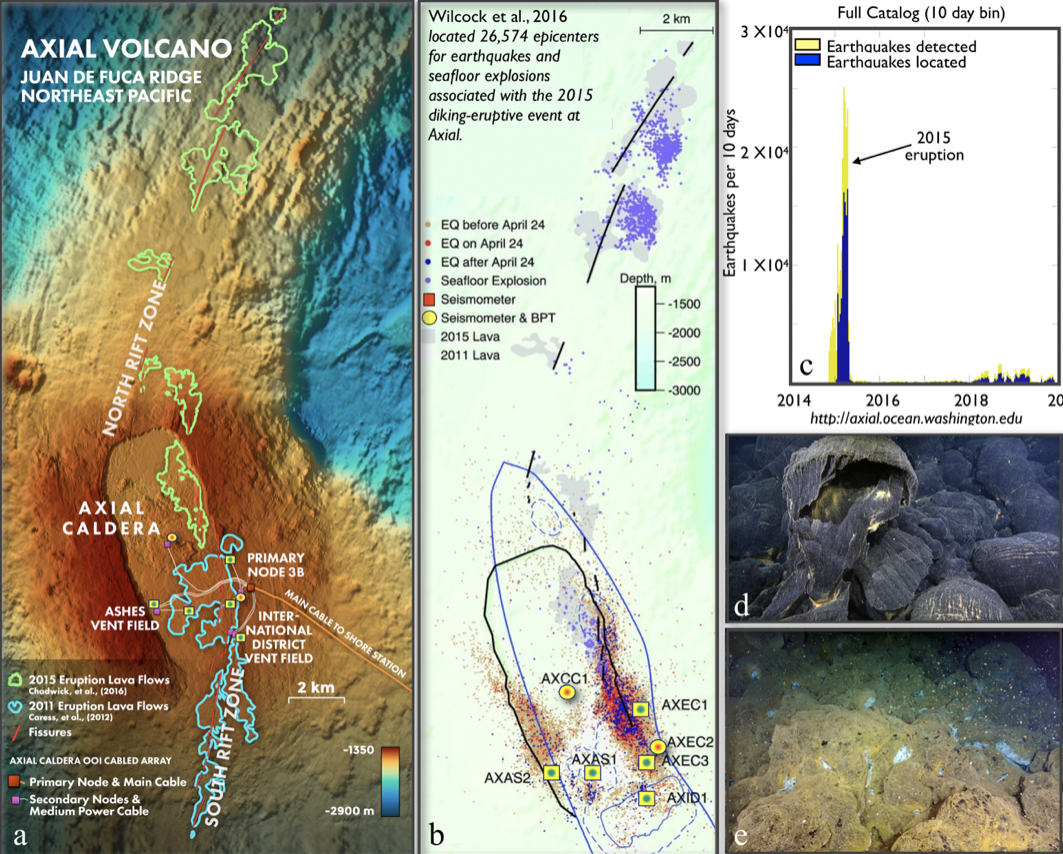 Figure 1. a) Location of RCA infrastructure and the 2011 and 2015 lava flows (after [3]). The northern rift flow reached 127 m in thickness [2]. b) location of RCA instruments and earthquakes (EQ) and explosions documented by the array (after [18]. the seismic array recorded ~37,000 impulsive events thought to be caused by eruptive explosions [18]. c) Over 8,000 earthquakes occurred in ~ 24 hrs, marking the start of the eruption [18]. Seismic activity is gain pickup up as the volcano reinflates. d) A breached pillow on the toe of the 127 m thick lava flow – one source of the explosions as lava extruded into cold seawater and super-heated magmatic gas was released [18]. e) The summit of the 127 m tick flow covered in acres of microbial mat 3 months after the eruption [2], small snow blowers emanating from the subsurface contained hyperthermophilic archea [16].