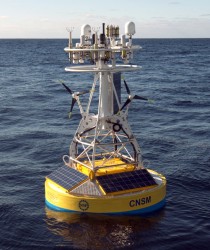 The OOI project is moving toward completion of the construction phase and has successfully deployed, over the past few months, additional Coastal, Global, and Cabled systems. A revised installation schedule is now available here.

We are now entering the final deployment phase of the many instruments and platforms that comprise the OOI, as well as preparing for the delivery of data to the OOI user community. There are several important items described in this message regarding the next phases of the OOI program.

Portions of the Endurance Array uncabled infrastructure were deployed in October, including two inshore surface moorings, a wire-following profiler mooring, and three coastal gliders. In coordination with the cabled deployments, two cabled benthic experiment packages and one cabled surface-piercing profiler were installed on the Oregon Line over the summer. (Endurance Array instrument tables here)

OOI system software: The completion and implementation of the final coding of the OOI system software, OOI Net, is managed by Ocean Leadership and will be transitioned to long-term operations and management by Rutgers University. OOI Net will build upon the cyberinfrastructure design initially established for the OOI by UCSD. Ocean Leadership and Rutgers (with Dr. Manish Parashar as lead) are coordinating the transition of that work, with subawards to Raytheon Corporation and RPS ASA for core code and user interface development, respectively. Instrument drivers and data product algorithms are being integrated into the data flow from the instruments through the user interface, under Ocean Leadership and Rutgers management, assuring open access to all data products by OOI users. The final completion and commissioning of the system software will occur in May 2015. Preliminary (pre-commissioned) data may be available prior to May through the ‘data’ tab on this website (see below).

Data Assessment and Data Management: Prior to full software commissioning in May 2015, the OOI and the UNOLS Ocean Observing Science Committee (OOSC) will be engaging users in the development of effective data assessment and data QC procedures that best serve the initial needs of the OOI users. A ‘mini-workshop’ on data assessment of OOI coastal data is being coordinated by the UNOLS OOSC and Cyberinfrastructure data management group at Rutgers, and will occur in late January/early February 2015. This meeting will engage non-OOI experts on the data obtained from specific sensors within the coastal arrays (Pioneer and Endurance).  The goal of the mini-workshop will be to assess initial data output from selected sensors as well as obtain community feedback on initial data evaluation processes and procedures. The outcome from the workshop will guide the data management group in effective data assessment procedures, and inform the OOSC about establishing science workshops for the coastal arrays later in 2015.   Further data assessment mini-workshops with external experts are planned for selected cabled instruments (April 2015) and global instruments (May 2015).  These mini-workshops are powerful tools for broader acceptance of the OOI data assessment approach, and should lead to exciting science workshops under the science themes of the OOI.

The data management component of the OOI, including data quality control, is co-located with the cyberinfrastructure group at Rutgers University, as recommended through NSF community input. Under the direction of Scott Glenn and Oscar Schofield, the data management group will consist of a data manager with ocean science data experience and four data evaluators, each with experience with OOI instrumentation as well as with data processing and evaluation. Data evaluation procedures include compilation of statistics from automated QC algorithms and qualitative assessments based on ‘quicklook’ plots of data. These procedures will evolve with feedback and engagement with users, initially through the mini-workshops describe above, and continuing through recommendations from users for improvements/changes in the data QC approach.

All OOI instruments are calibrated prior to deployment and subjected to pre-deployment testing. During OOI deployment/recovery cruises, the at-sea team conducts CTD casts and collects water samples for discrete sample analysis of a number of parameters. Data from these CTD casts and sample analyses are part of the OOI data record and will be accessible to all users through OOI Net. Cross-calibration activities conducted during each cruise will be described in the cruise report, and data from those activities will be available via the website with a target of within three months from the end of the cruise.

Data Availability: The integration of data drivers into the OOI Net software will occur over a period of a few months, with final commissioned data scheduled to be available through the OOI Net user interface by late May 2015. However, the project team will make selected pre-commissioned data available through the OOI website on the following tentative schedule (updated on 28 November):

18 May 2015: Commissioned data from all deployed systems

Pre-commissioned data will not have had any data QC applied prior to posting. (this data disclaimer is posted on the ‘data’ page of the website)

Overall OOI progress toward completion: The OOI project team works each day to fulfill the overarching objective of sustained data delivery to users from several hundred instruments within an integrated, multi-disciplinary, reconfigurable observatory. The commissioning of the observatory in late May 2015 will validate post-construction data delivery and will be the beginning of sustained operations. Please share with your colleagues that the OOI construction team is on track to complete the full deployment of the instruments, platforms and system software as described and authorized by the original award in 2009. In addition, the deployment of the OOI will be completed within the authorized construction budget. As the OOI makes a transition into operations in 2015 and begins several months of operational testing and performance evaluation, it is worth noting that the OOI will provide users with new opportunities for discovery and for creative investigations into ocean processes. It will be exciting to see these opportunities explored by OOI users!

Please watch this page for additional developments in the weeks and months ahead.