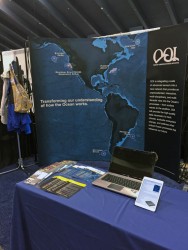 Last week, members of the OOI team connected with members of the science, management, and education OOI user community at the 2014 American Geophysical Union (AGU) Conference in San Francisco.

The AGU Fall Meeting, held annually in San Francisco, CA, is the largest worldwide conference in the geophysical sciences, attracting over 20,000 Earth and space scientists, educators, students and policy makers.

OOI team members fielded questions from interested users all week at an OOI booth in the exhibit hall. The meeting emphasis was to share with users the status of currently deployed OOI assets and preliminary data. In 2014 alone, the OOI deployed 34 moorings, 9 instrumented seafloor sites, 16 gliders, and approximately 550 instruments. These successful deployments occurred in the northern hemisphere Global sites (Station Papa, Irminger Sea), within the coastal domain of the Atlantic and Pacific (Pioneer and Endurance Arrays), and along the Cabled Array on the Juan de Fuca Plate.

“It was a great time to connect with the user community as we are nearing completion of the construction phase and have Preliminary data posted on our website.” Mike Kelly, Vice President & Director of Ocean Observing at the Consortium for Ocean Leadership.

A few booths away from the OOI was the Incorporated Research Institutions for Seismology (IRIS) who, just a few days prior to the meeting, had made available on their website live streaming seismometer data from the OOI Cabled Array (download the data here!). There was much excitement between the two booths as all were excited to see these data streaming online. Preliminary data from the coastal gliders (Pioneer and Endurance) and Pioneer Array profilers are expected to become available through a data portal on the OOI webpage early next month.