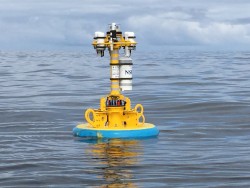 Researchers from Oregon State University hit the Pacific waters Tuesday to drop the area’s final piece of a more than 10-year initiative.

(From OregonLive / by Tara Kulash) — The crew placed a buoy and an undersea glider about one mile from shore that will continuously measure ocean data, from water temperature and salinity to nutrient levels.

Tuesday’s excursion was just one aspect of the Endurance Array, a large part of the Ocean Observatories Initiative.

Funded by the National Science Foundation with a price tag of $386 million,  it’s the largest nationally funded marine science infrastructure in history.

Or as Jack Barth, professor of oceanography at Oregon State University, likes to put it: “an underwater laboratory.”

The Ocean Observatories Initiative began in 2004 meetings and launched in 2009. It is designed to measure physical, chemical, geological and biological conditions in the ocean and seafloor. Findings are supposed to help scientists better understand environmental changes that can affect biodiversity, ecosystems and climate.