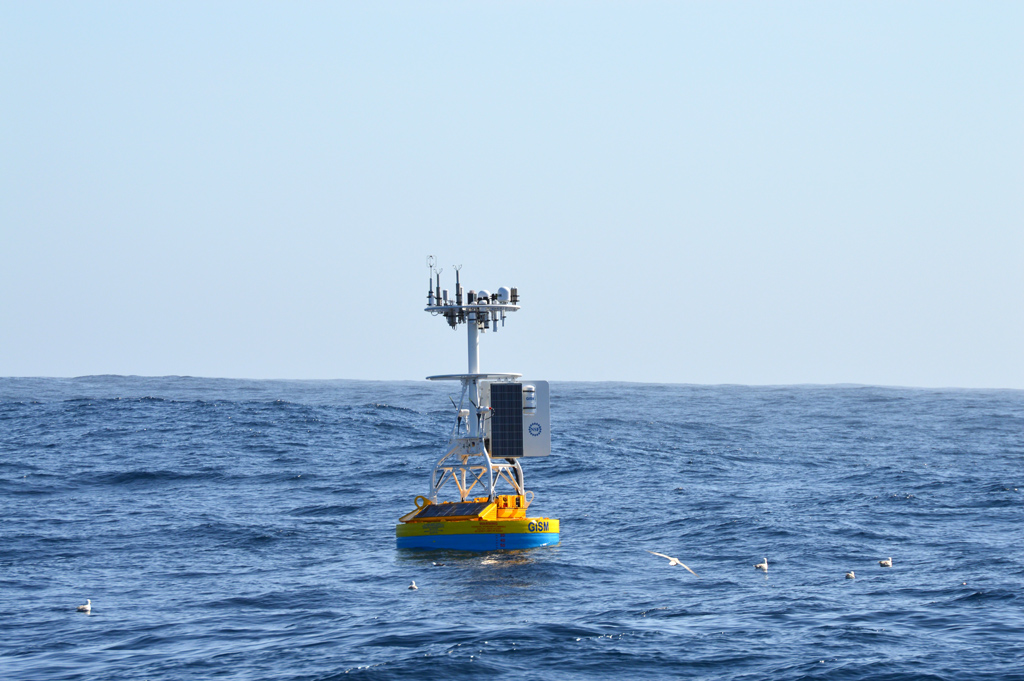 The newly deployed Irminger Sea Array Global Surface Buoy floats along the surface as seabirds investigate. The Global Surface Mooring will collect data from sensors distributed throughout the water column and transmit it back to shore via satellite. In this strongly forced ocean region, the surface meteorological and turbulent air-sea flux sensor packages will contribute much sought after information about the interaction between the atmosphere and ocean. (Photo Credit: Sheri N. White)

The 2015 Irminger Sea Array cruise marked the first “turn” (recovery & reinstallation) of the moorings and gliders.

In addition to the deployments, the team conducted shipboard sampling including bathymetric surveys, water sample collection, and CTD casts in support of field calibration and validation of the platforms and instruments.

During the cruise, the team was able to observe first hand the heavy winds so notorious for the area. As the ship steamed north from Woods Hole, a large storm developed over the Irminger Sea, and the wind picked up to 60 knots. The R/V Atlantis slowed her passage to the site, waiting for more moderate weather to recover and deploy moorings. A reminder of why these areas have traditionally been so difficult to survey by ship.

The Irminger Sea is a site where historically in many winters strong heat loss at the sea surface leads to the surface water becoming dense and sinking to the deep ocean. The OOI surface mooring is located very near the profiler mooring (click here for more information on the array’s infrastructure) and will provide oceanographers the data needed to document the atmospheric as well as oceanographic conditions that lead to deep convection.

The Irminger Sea Array is one of four sites in the OOI focusing on the critical, yet under-sampled, high-latitude regions of the Pacific and Atlantic.  It includes a network of moorings that will support sensors for measurement of air-sea fluxes of heat, moisture and momentum; physical, biological and chemical properties throughout the water column. The placement and instrumentation of the OOI Irminger Sea array is coordinated with the international OSNAP (Overturning in the Subpolar North Atlantic Program) examining the large-scale, low-frequency, full water-column net transports of mass, heat and fresh water associated with the meridional overturning circulation in the subpolar North Atlantic.

The OOI, a project funded by the National Science Foundation, is planned as a networked infrastructure of science-driven sensor systems to measure the physical, chemical, geological and biological variables in the ocean and seafloor. The OOI will be one fully integrated system collecting data on coastal, regional and global scales. Greater knowledge of the ocean’s interrelated systems is vital for increased understanding of their effects on biodiversity, ocean and coastal ecosystems, ecosystem health and climate change. OOI will put ocean observing data. 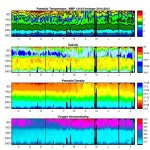 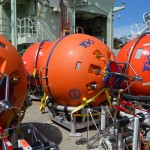 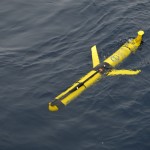