By Leslie Smith on June 20, 2016 in News, OOI In The News, Science Highlights 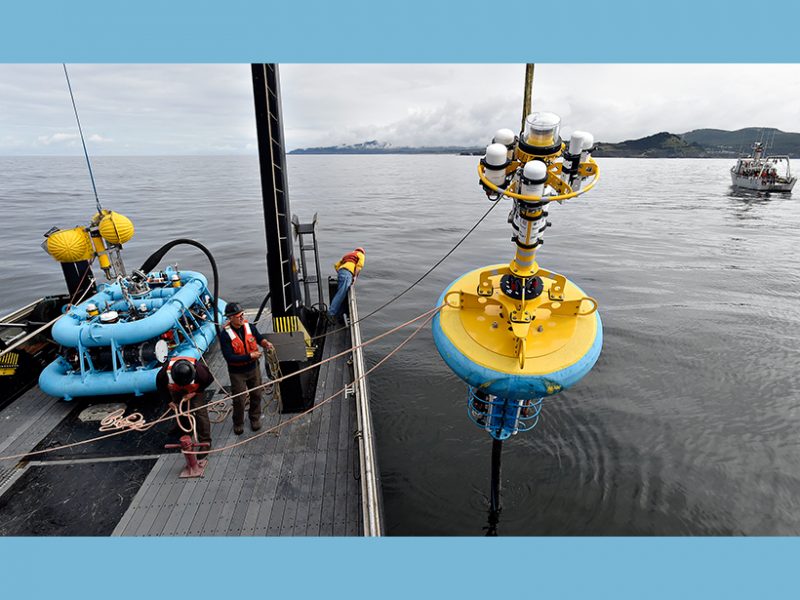 (From EOS, 97) By Robinson W. Fulweiler, Glen Gawakiewicz, and Kristen A. Davis

The coastal ocean provides critical services that yield both ecological and economic benefits. Its dynamic nature, however, makes it a most challenging environment to study. Recently, a better understanding of the coupled physical, chemical, geological, and biological processes that characterize the coastal ocean became more attainable.

Ocean Observatories Initiative systems were fully commissioned as of the end of 2015.

Last January, the Ocean Observatories Initiative (OOI), a program of the National Science Foundation (NSF), held a workshop in Washington, D. C., to acquaint potential users with the capabilities offered by the OOI systems, which were fully commissioned as of the end of 2015. A future workshop is planned for this fall on the West Coast.

OOI maintains two coastal ocean arrays: the Pioneer Array in the northwest Atlantic and the Endurance Array in the northeast Pacific. Each has a series of fixed moorings spanning the continental shelf, as well as mobile assets—underwater gliders and propeller-driven autonomous underwater vehicles.

Together, these observatories are capable of resolving coastal ocean processes across a range of temporal and spatial scales. Such data are critical for understanding nutrient and carbon cycling, controls on the abundance of marine organisms, and the effects of long-term warming and extreme weather events.

A key outcome of the workshop was the introduction of the OOI data portal, where participants acquired firsthand experience in data querying, plotting, and downloading of OOI data. Additionally, participants had numerous opportunities to provide feedback to the OOI Cyber Infrastructure Team.

Anyone can sign up for an account to gain access to OOI data. These data are now available for plotting on the OOI data portal, and select data streams are also available. These sites will be updated with additional data and downloading formats as they become available.

OOI has entered a new phase of community engagement where scientists and educators are encouraged to use the data, provide feedback on data access ease and quality, and, in the process, expand our understanding of coastal oceans.

NSF program managers from all relevant disciplines expressed their support for the arrays. Additionally, we learned the details of how to submit proposals related to OOI data, and all the proposal submission information is available on the OOI website. Workshop participants also learned about the OOI education portal, which can bring cutting-edge ocean data and ocean science concepts to classrooms and informal science education sites.
The message from NSF was clear—OOI has entered a new phase of community engagement where scientists and educators are encouraged to use these data, provide feedback on data access ease and quality, and, in the process, expand our understanding of coastal oceans. A new era is approaching in which integrated ocean observatories will help stimulate innovative science and educational partnerships at the same time they enhance our ability to understand the changes occurring in our coastal oceans.

Jack Barth and Chris Edwards contributed to the writing of this summary. We thank NSF for sponsoring this workshop and the University-National Oceanographic Laboratory System for organizing the event, with a special thanks to Larry Atkinson and Annette DeSilva for their efforts. We also thank the workshop participants and the OOI Cyber Infrastructure Team for their continued work.