Home :: What's New ::World Oceans Day: Bring the seas into your home; exploration is one click away 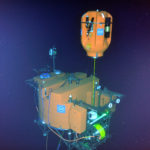 Resting 200 meters under water at the base of the Axial Seamount, the Cabled Shallow Profiler Mooring science pod hovers above its docking station.  Soon it will begin its ascent toward the surface, sampling the water column using the instruments (black cylinders) attached to the pod. Credit: NSF-OOI/UW/ISS; Dive R1842; V15

When the HMS Challenger set sail in 1872, researchers made discoveries that laid the foundation of the science of oceanography. These early scientists couldn’t have imagined that more than a century later, the secrets of the sea could be discovered by almost anyone, even those thousands of miles from the coastline.

Today with the National Science Foundation (NSF)-funded Ocean Observatories Initiative (OOI), the ocean is accessible 24 hours a day, 7 days a week to anyone with an Internet connection.

“The OOI is placing as much ocean data online as possible and making it available in real-time,” says Roger Wakimoto, NSF Assistant Director for Geosciences. “In addition to scientific discovery, we hope to spark the public’s interest in the sea and contribute to the safety of those who make their living on the water or vacation along the coast.”

The OOI is a permanent scientific presence in the ocean.  It consists of 83 platforms with more than 830 instruments providing more than 100,000 scientific and engineering data products. These platforms and instruments are spread across seven arrays located in the Atlantic and Pacific Oceans.

The OOI Data Portal opened its doors for the first time in early January to allow users -scientists, educators, and the public – to freely access OOI data.  Over the past five months, the quantity of data available and tools for downloading and plotting data have steadily increased, and the OOI continues to expand its data availability.

“Much like the Challenger crew, the OOI is employing new technology that we hope will revolutionize our understanding of the ocean,” says Greg Ulses, the OOI Director at the Consortium for Ocean Leadership, which manages the OOI Program for NSF. “We are doing that by focusing on our online data delivery. We live in a time of constant Internet connection – your computer, your tablet, your phone – so we’re giving people access to the ocean by meeting them where they are, online.”

Data from the OOI will foster scientific advancements by helping researchers gain a better understanding of earthquakes and shifts in tectonic plates; hydrothermal vent and methane seep species; climate and weather phenomena such as El Niño; ocean acidification; the upwelling that fuels productive coastal fisheries; and the links between ocean circulation and climate.

Scientists aren’t the only ones benefitting from the OOI. A suite of online tools, including data visualization exercises and lesson plans, allows educators to engage students in scientific inquiry on oceanographic concepts. In addition, commercial or recreational fishers may monitor offshore conditions by checking data from nearby buoys.

Anyone with an Internet connection can download and view plots of OOI data from all arrays, or watch a live-streaming, high-definition video from a hydrothermal vent 250 miles off the coast of Oregon.

Tales of krakens, whirlpools, and passages to foreign lands have long united people and kindled interest in the mysterious forces of the sea. This year on World Oceans Day and beyond, celebrate by connecting with the ocean live – without even getting wet.

More about the OOI

The OOI is a network of platforms and sensors that track the oceans’ physical, chemical, geological, and biological properties from the seafloor to the sea surface. The OOI consists of seven arrays located across the North and South Atlantic and Pacific, including one cabled, two coastal, and four global arrays. Using undersea robotics, moorings, fiber-optic cables, and specialized instrumentation, the OOI links technology and advanced engineering capabilities to an intricate cyberinfrastructure, bringing ocean observing data to shore. In the decades ahead, oceanographers, educators, and the public will use the observatory and its components to conduct research and interact with the ocean in a way never before possible.

Funding for the Ocean Observatories Initiative is provided by the National Science Foundation through a Cooperative Agreement with the Consortium for Ocean Leadership.  The Consortium for Ocean Leadership has overseen the construction and initial operations of the OOI through meaningful partnerships with WHOI, OSU, UW, and Rutgers.  The OOI is an integrated infrastructure of science-driven platforms and sensor systems that measure physical, chemical, geological, and biological properties and processes from the seafloor to the sea surface. OOI data are made available free of charge to the user communities of oceanographers, scientists, educators, and to the public; some data are provided in near-real time.

The National Science Foundation (NSF) is an independent federal agency that supports fundamental research and education across all fields of science and engineering. In fiscal year (FY) 2016, its budget is $7.5 billion. NSF funds reach all 50 states through grants to nearly 2,000 colleges, universities and other institutions. Each year, NSF receives more than 48,000 competitive proposals for funding and makes about 12,000 new funding awards. NSF also awards about $626 million in professional and service contracts yearly. 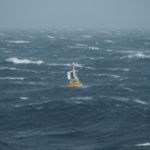 A Surface Buoy bobs in the waves at the Global Argentine Basin site in the Southern Hemisphere. Global moorings, like this one, are designed to withstand and operate in harsh, high latitude sea states. Credit: OOI Coastal Global Scale Nodes program Argentine Basin deployment team 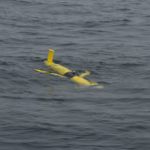 A Coastal Glider floats along the surface of the ocean.  Soon it will begin its dive through the water column, sampling the water along a saw-toothed path.  Gliders move by changing their buoyancy, without the use of a propeller. Credit: Craig Hayslip, OSU 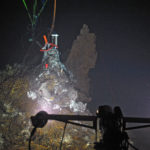 OOI Cabled Array instruments are affixed onto the El Gordo hydrothermal chimney in the International District Hydrothermal Field on the Axial Seamount. These instruments will measure the temperature, chemistry, and the microbial community on the vent. Credit: NSF-OOI/UW/ISS; Dive R1839; V15 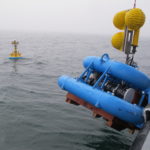 Deployed off the coast of Washington, the Coastal Endurance WA Inshore Surface Mooring collects data from the seafloor to the surface to examine coastal upwelling, a process fueling productive fisheries along the West Coast. Credit: Credit: Craig Risien, OSU 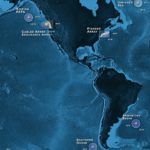 The OOI’s seven arrays are deployed in key locations in the Atlantic and Pacific oceans. Credit: Ocean Observatories Initiative and the Center for Environmental Visualization, University of Washington