In July, the OOI CGSN operations team completed another “refresh” of the Pioneer glider fleet. The nominal lifetime for OOI coastal gliders (battery limited) is 90 days. The fleet is refreshed by recovery of exhausted gliders and deployment of refurbished gliders with fresh batteries.

The Coastal Pioneer Array is designed to have 6 Coastal Gliders deployed at a time.  Each glider traverses a distinct path within and around the Pioneer Array, sampling an area measuring over 24,000 km2, roughly the size of New Hampshire.

The first three Pioneer Array Coastal Gliders were deployed just over two years ago in May 2014. The map on the right shows a composite of the tracks of all the gliders deployed at Pioneer since those initial deployments.

The impressive results of glider piloting in the complex coastal environment are evidenced by the match between the composite tracks (right) and the planned tracks (left). The tracks that diverge from the plan show the difficulty of maintaining the glider navigation in the face of severe weather and strong currents.

On average, each of the 25 gliders, for which data are shown, were deployed for a duration of 66 days and travelled a distances of approximately 1200 km (750 miles).  The longest deployment was 118 days and the glider travelled a distance of 2,230 km (or 1,400 miles). That is roughly the same as driving halfway across the United States!

Congrats to the Pioneer team on a job well done. This is just the beginning! 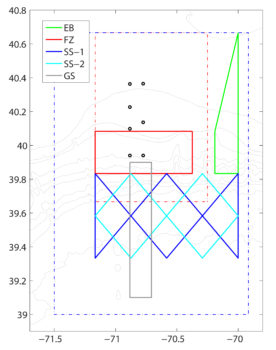 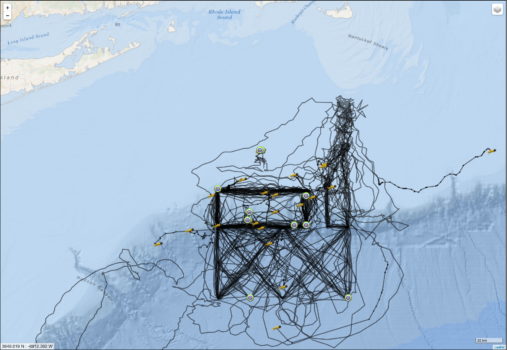 Each line represents the path of one glider. Glider symbols are the last location of the glider before recovery, green dots represent deployment locations.