The sea floor split open on April 24, 2015, but scientists had seen it coming for months.

Drawing on data from more than a dozen instruments arrayed around the underwater volcano known as Axial Seamount, they documented telltale tremors that shook its slopes. They watched the caldera at the top of the volcano swell like a balloon filling with air, building up pressure until it finally burst. They couldn’t see much of the eruption that happened next — the water was too cloudy with debris — but they know that it involved plumes of super hot water and bubbles of gas and steam that popped with the explosive force of a mortar round. By the time the eruption ended a month later, nearly 88 billion gallons of molten rock had flooded ocean bottom. 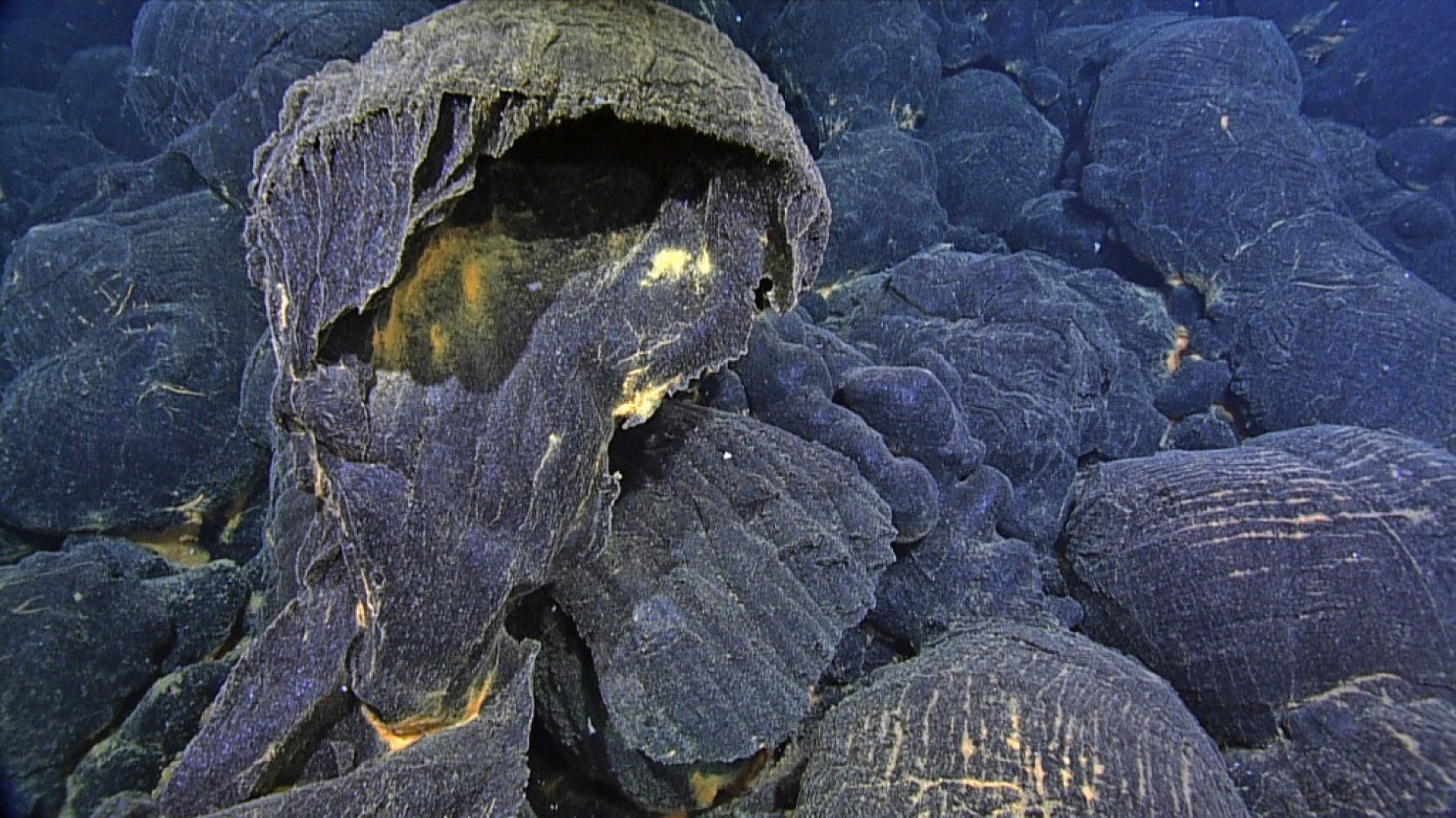 A hollow pillow flow with a frozen tongue of lava spilling from the opening of the volcano rests atop glass-covered flows that formed during the 2015 eruption. (University of Washington/OOI-NSF/CSSF-ROPOS)

Axial Seamount is a half-mile-high volcano 300 miles from the Oregon coast, rising up from the Juan de Fuca Ridge where two tectonic plates are spreading apart. The 2015 eruption there was the third largest submarine eruption known to science. It offered researchers their best-ever glimpse into the workings of an undersea volcano, and a window onto the mid-ocean ridge that circles our planet like the seam on a baseball.

“We only know about a dozen eruptions on the sea floor,” said David Clague, a volcanologist at the Monterey Bay Aquarium Research Institute. “Most of the world is not instrumented, and so they happen in solitude and no one knows. They are definitely the tree falling in the forest that no one hears.”

But after Axial Seamount erupted twice in the past decades — in 1998 and in 2011 — the National Science Foundation funded the installment of 550 miles of communications cable to and around the volcano. That cable powers some 130 sensors that measure the magma chamber, test the water column and monitor for earthquakes.

When the volcano erupted again in 2015, scientists got to watch the whole thing happen in real time, from the first tremor of activity to the moment when the last bit of lava hardened into rock. University of Washington oceanographer William Willcock, the lead author of one of the new studies on the eruption published this week in the journals Science and Geophysical Research Letters, said these are “the most detailed observations ever made” of an undersea volcano. They may well be among the most detailed observations of any eruption on land too.

Chief among the findings from the project is that the floor of the seamount’s caldera drops during an eruption — in 2015 it fell by eight feet. Then, as gases and magma refill the chamber, it begins to inflate again. When it reaches a particular threshold, the volcano erupts. This is what allowed the observation team to predict that the seamount would erupt months before it actually happened.

Right after the 2015 eruption, Axial Seamount began to rapidly reinflate, then slowed. It’s gained almost half the height it lost in the eruption.

“Now we’ll just have to watch and see how fast it builds back up,” Oregon State oceanographer Bill Chadwick said in a statement (he was at sea when the results were announced this week). “We’ll be trying to forecast the next eruption again, but right now it’s a little early to tell.”

The observation team also found that seismometers at the site picked up an increasing number of earthquakes in the months leading up to the eruption — shortly before the event, there were thousands of tremors a day.

Though Axial Seamount is hundreds of miles from shore and a mile beneath the surface of the ocean, it is easier to study than most volcanoes on land. It’s extremely active, offering lots of chances to observe an eruption. It has a simple structure, and its caldera can be approached safely when it’s not active. The fact that it’s under water means that its interior can be probed with seismic waves, something that is much more difficult to do on land.

The data from the cabled array is part of NSF’s Ocean Observatories Initiative; after it’s collected it gets posted online and is available for anyone to use. The team hopes that it can help inform efforts to monitor land volcanoes and predict their eruptions, which usually aren’t recognized until a couple of weeks out.

“This is a great laboratory to study volcanic processes,” Clague said.