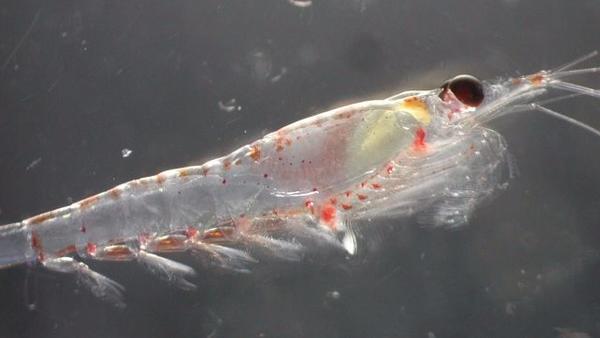 Zooplankton, including this Euphausia pacifica, spend their days in deep water and rise to the surface to feed at night. They made an extra trip on Monday because they were fooled by the eclipse. (NOAA)

We humans weren’t the only life-forms to be affected by the Great American Eclipse on Monday.

Tiny marine creatures known as zooplankton got all mixed up as the sunlight grew increasingly dim along the path of totality.

One hour before the sky went dark, the gradual change in light caused the confused little critters to begin swimming up the water column to start their nighttime feeding routine.

As soon as totality was over and the light levels began to return to normal, however, they realized their mistake and made their way back to the safety of deeper, darker waters.

“They didn’t make it all the way up because the eclipse is only so long,” said Jonathan Fram, the Oregon State University oceanographer who observed them. “It takes them a while to get to the surface.” 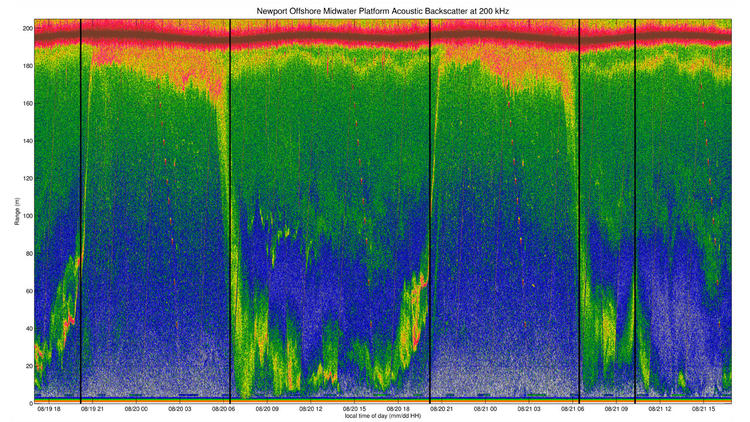 This plot shows zooplankton (in green) making an extra trip to the ocean surface (in red) during the eclipse. Normally, they come up to feed only at night. (Jonathan Fram / Ocean Observatories Initiative)

To measure the movement of the plankton, Fram used bioacuoustic sonar equipment that is stationed off the Oregon coast.

The sonar equipment is part of a larger suite of instruments deployed by the Ocean Observatories Initiative that allows scientists to measure all kinds of oceanic variables, including water temperature, sunlight and air temperature.

Data collected by these instruments show that, overall, ocean animals do not experience the eclipse the same way we do.

On land, creatures in the path of totality felt the temperature drop several degrees as the moon covered the sun. However, the ocean temperature barely budged — even at totality.

On the other hand, the change in light intensity, which humans generally noticed about 15 to 20 minutes before totality, was more obvious to the deep-dwelling zooplankton earlier in the celestial event, Fram said.

“Light level changes quite a bit at depth,” he said. “If you change the surface light just a little bit, it gets noticeably darker to zooplankton.”

He added that his findings are consistent with similar research done during an eclipse in the early 1970s.

Astronomers and physicists capitalized on the total solar eclipse to gather data on the sun, but findings from the ocean were welcome, too.

“That might be my favorite story of the whole eclipse,” said Dan Seaton, a solar physicist at the University of Colorado who was not involved with the research. “It’s sort of adorable, this whole colony of tiny little creatures being like, ‘Oooh, nighttime!’ and then a few minutes later they’re like, ‘Oops.’

“It’s all part of the magic of eclipses,” he added.