It’s not just humans who will be affected by the Great American Eclipse coming on Aug. 21 — expect animals to act strangely too.

Anecdotal evidence and a few scientific studies suggest that as the moon moves briefly between the sun and the Earth, causing a deep twilight to fall across the land, large swaths of the animal kingdom will alter their behavior.

But there is always more to learn, so it should come as no surprise that a few experiments to document animal behavior are in the works for the Great American Eclipse.

Jonathan Fram, an assistant professor at Oregon State University, plans to use a series of bio-acoustic sonars to see whether zooplankton in the path of totality will rise in the water column as the sun is obscured by the moon.

Across the ocean, an enormous number of animals hide in the deep, dark waters during the day, and then swim upward during the cover of night to take advantage of the food generated in the sunlit part of the ocean.

“It’s the biggest migration on the planet, and most of us don’t even know it is happening,” said Kelly Benoit-Bird, a senior scientist at the Monterey Bay Aquarium Research Institute who is not involved with Fram’s study.

Scientists have known for decades that changes in light can affect these animals’ migration patterns. For example, most of these deep-water migrants won’t swim as close to the surface as usual during a full moon. Still, a total eclipse provides an ideal natural experiment that can help researchers learn how important light cues are to different critters, Benoit-Bird said.

Fram, who works on a project known as the Ocean Observatories Initiative, will be able to get data from six bio-acoustic sonars off the Northwest coast — three that are directly in the path of totality and three that are not. This should allow researchers to see how much the sun has to dim to affect changes in the zooplankton’s movements. 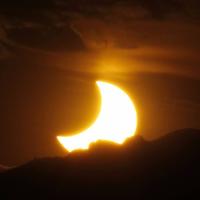