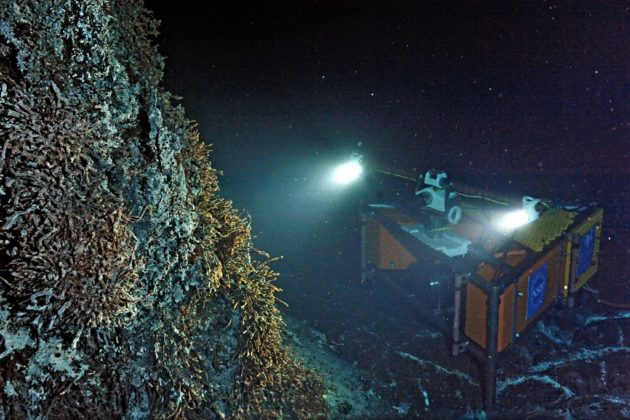 A high-definition camera built by the University of Washington’s Applied Physics Laboratory is trained on the 13-foot-tall, actively venting hot spring called Mushroom at the summit of the Axial Seamount, about a mile deep in the Pacific off the Oregon coast. (UW / NSF-OOI / CSSF Photo)

Wave Broadband is coming out in the open about its partnership with the University of Washington to provide broadband connectivity for the Regional Cabled Array, an undersea observatory that’s part of the federally backed Ocean Observatories Initiative.

UW operates and maintains the Regional Cabled Array, which collects a torrent of scientific data from the floor of the Pacific Ocean off the Oregon coast. More than 150 scientific instruments measure seismic activity, fluid flow, chemical composition and other phenomena in areas such as the Southern Hydrate ridge and the Axial Seamount volcano, lying as much as a mile beneath the ocean surface..

Electrical power and data flow 24/7 via a 323-mile-long cable that runs between the instrument array and a shore station in Pacific City, Ore. Keeping up with the real-time data stream requires a network that can handle transport speeds of up to 100 gigabits per second.

That part of the job gets handled by Wave, which is headquartered in Kirkland, Wash.

“We rely heavily on fiber connectivity from Wave Business to not only quickly transfer our data from the Oregon Coast shore station to UW for analysis, but to also, in real time, control and communicate with our underwater instruments to respond to oceanic events,” UW oceanographer Deborah Kelley said in a news release. “Wave is a critical partner to our success.”

Wave’s fiber infrastructure also sends the stream to the Ocean Observatories Initiative’s data portal at Rutgers University in New Jersey, to other data centers and to the rest of the world.

“We’re excited to partner with the UW and the Cabled Array program to empower real-time sharing of the data at the speed of light,” said Patrick Knorr, executive vice president of business solutions at Wave.

Wave is in the middle of being acquired TPG Capital and combining with two other companies — RCN Telecom Services and Grande Communications Networks — to form the nation’s sixth largest internet and cable operator in a $2.36 billion deal.

In the years ahead, researchers at UW and elsewhere expect to use the Regional Cabled Array to gain new insights about the marine effects of climate change, including ocean acidification, and to monitor the flora and fauna in one of the Pacific’s most biologically productive regions.

The data network also keeps a close eye on seismic activity in a part of the Pacific that’s been known to generate strong earthquakes and tsunami waves. In 2015, the cabled array gave scientists their first opportunity to monitor an eruption at the Axial Seamount in real time. More than 8,000 earthquakes were recorded over a 24-hour period, and the undersea volcano’s summit dropped 7 feet.

It’s conceivable that undersea instrument arrays like the Regional Cabled Array could someday pick up the early warning signs for a catastrophic Cascadia mega-earthquake, also known as the “Really Big One,”