Hendrikx Freitas et al., 2018 compare satellite and Endurance Array glider estimates of chromophoric dissolved organic matter (CDOM) to characterize seasonal patterns and latitudinal and cross-shore gradients in particle concentrations between the Washington and Oregon shelves. While the Oregon and Washington shelves are both highly productive regions of the northern California Current Ecosystem, there are significant differences in the physical processes, with the central Washington shelf generally subject to weaker upwelling and a stronger Columbia River influence. The difference in physical forcing is reflected in satellite estimates of chlorophyll, which show higher concentrations off the Washington coast.

The conclusions from satellites contrast with in situ observations from gliders. Despite the differences in physical forcing, Henderikx et al., 2018 find OOI glider fluorescence based measurements of chlorophyll to be similar in magnitude across the Oregon and Washington shelves. Their research suggests that latitudinal differences in CDOM may be a partial explanation for perceived trends in satellite-derived chlorophyll. The OOI gliders gather simultaneous chlorophyll and CDOM fluorescence from an integrated three-channel sensor. While the glider observations indicate similar levels of chlorophyll fluorescence, they also show an increased presence of suspended sediments and CDOM off WA. The OOI observations, although temporally limited, indicate potential contamination of satellite retrievals of chlorophyll due to CDOM and suspended materials in the water column, particularly off the WA shelf, that should caution further attribution of satellite chlorophyll signals to differences in production. 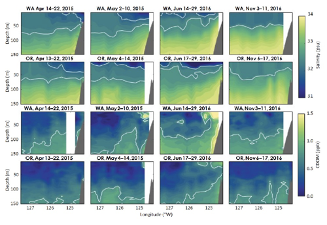 Cross-shore salinity and CDOM at the Washington (WA) and Oregon (OR) Endurance Lines from glider profiles at selected times in 2015 and 2016. Each panel represents a single glider section. The top two rows are salinity (white lines are 32.0 and 32.5 psu) and the bottom two rows are CDOM (white lines are 0.75 and 1.25 ppb). From Hendrikx Freitas et al. (2018).