In recent years, hypoxic and even anoxic events have regularly occurred off Washington and Oregon as they have in upwelling regions worldwide [1, 2]. The OOI Endurance Array’s location, platforms and sensors were designed to address major OOI Science Themes with a particular focus on Hypoxia on Continental Shelves and Shelf/Slope Exchange [3]. Since its first full deployment in April 2015, the Endurance Array has maintained oxygen sensors at 6 fixed locations near the surface and near the bottom over the Washington and Oregon shelf and slope. Similar oxygen sensors are found on Endurance Array profilers and gliders and across other OOI arrays.

OOI marine operators, systems engineers and data team members have worked together to continually improve the quality of the OOI dissolved oxygen data products. We have worked with the vendor to improve their calibration of sensors; have compared data to physical samples [4]; and have implemented a UV-based biofouling mitigation [5].

During this time, near-bottom oxygen levels at the OOI Oregon Inshore Surface mooring were often below the hypoxia threshold. When winds blow to the south, the near-bottom temperature decreases due to coastal upwelling, with a slight lag relative to the wind. During these events, near-bottom oxygen usually decreases (e.g., 23-25 July). Conversely, during low or northward winds the near-bottom temperature and oxygen increase rapidly. These changes are consistent with the upwelling circulation drawing near-bottom cold water low in dissolved oxygen toward the coast during upwelling and pushing warm water containing more oxygen down and away from the coast near the bottom during downwelling. The dissolved oxygen does not follow the winds or temperature as clearly as temperature follows the wind because there are the additional biological processes of photosynthesis and microbial decay that raise or lower dissolved oxygen levels, respectively.

Since this report [6], researchers continue to use OOI data to characterize hypoxia in summer 2018. There is also increasing interest in, and use of, OOI data by mission-oriented agencies such as the Oregon Department of Fish and Wildlife. 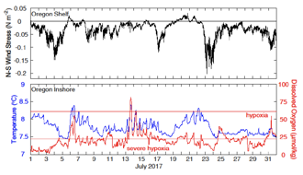