The OOI is a large infrastructure project designed to be in operation for 25 years; that is long enough for a researcher to spend almost their entire career engaging with the OOI. Because of these new opportunities, students and early career scientists are diving in to the OOI as early adopters of the system and gaining their foothold for the long haul. This summer, the OOI Communications Team will be highlighting some of these scientists and the work they are doing with the OOI, like Dr. Hilary Palevsky, a Postdoctoral Scholar at the Woods Hole Oceanographic Institution studying carbon sequestration in the Irminger Sea.

Having grown up in western Pennsylvania, Palevsky did not foresee becoming an oceanographer. During her junior year at Amherst College, Palevsky had her first opportunity to test her sea legs. After spending a semester at the Williams-Mystic Maritime Studies Program, including ten days aboard the SSV Corwith Cramer tall ship, she was hooked and began her path to pursue a career in oceanography.

“I wanted to study the ocean’s role in climate and how it takes carbon out of the atmosphere,” says Palevsky. “My goal was to look at the balance between biological, physical, and chemical processes and how they allow the ocean to take up carbon.”

Palevsky’s work focused on container ship transects in the north Pacific Ocean where she found that deep winter ventilation reduced the amount of carbon sequestered in the deep ocean by sinking organic matter. However, Palevsky only had access to surface measurements, which left her with lingering questions about the connections between winter ventilation and carbon cycling in the deep ocean.

The OOI provided Palevsky with the missing piece. “The OOI was the only opportunity out there to get that kind of data – winter data and depth profiles,” says Palevsky. So once again Palevsky crossed the country, this time heading to Woods Hole Oceanographic Institution for her Postdoctoral Scholarship.

Palevsky designed her own Postdoctoral project studying the biological pump and carbon cycling in the Irminger Sea over the entire year and water column. To fund this work, Palevsky applied for the prestigious Woods Hole Oceanographic Institution Postdoctoral Scholarship. “At the time I proposed my project the OOI Irminger Sea Array was not yet online,” reflects Palevsky. “It was a bit of a race as I moved across the country hoping the data would come online in time.”

The Irminger Sea, located southwest of Greenland in the North Atlantic is a critical location for studying the global carbon cycle, deep convection, and carbon sequestration. “The fact that we have biogeochemical measurements year-round and for the full water column from the OOI is incredible,” says Palevsky. “A lot of the other observations available only measure the surface or maybe the top 30 meters.”

Some of Palevsky’s initial analyses can be found in her article in the OOI Special Issue of Oceanography Magazine.

To examine the carbon cycle, Palevsky focuses on oxygen, using it as a tracer to look at the balance between photosynthesis and respiration. Oxygen can be a tricky thing to measure, however. “Because of challenges of calibrating oxygen sensors,” notes Palevsky, “the current quality of the data is not accurate enough to be able to get a good picture of the surface oxygen and ocean-atmosphere exchange.”

So once again Palevsky put pen to paper to chart her own course and applied for NSF-funding, with her Postdoctoral sponsor David Nicholson (WHOI), to apply a new approach to enhance the OOI’s ability to calibrate their oxygen sensors and increase the accuracy of those data. “The solution on Argo floats was to move the location of the oxygen optode so that every time a float surfaces it sticks the sensor in the air. You get a one-point calibration and it improves the oxygen data quality. Our thought with this project was that we could apply the same technique to OOI gliders and have them calibrate their oxygen sensors in the air every time they surface.”

Palevsky has just returned from three-weeks at sea on the OOI Irminger Sea turn cruise testing an implementation of this solution on OOI open ocean gliders. “It is so exciting to have these new gliders in the water and to watch them stream back data. Not only are the data they collect more accurate, but they are also passing on their more accurate calibrations to the other oxygen sensors on the array’s four moorings. This is going open new possibilities for what we can learn about carbon cycling from the array.”

In terms of what is next for Palevsky, she will be staying on the East Coast taking on the position of Lecturer at Wellesley College in Massachusetts. For her next OOI adventure, she describes examining mesoscale variability within the Irminger Sea Array and long-term trends and variability in these processes.

The OOI is “Pioneering a place that the oceanography community has agreed where we want to go,” she said. “It is not just locations that are convenient, but locations that we picked because they are interesting and important.”

For her part in the oceanographic community, Palevsky is committed to supporting the next generation of ocean scientists, and took two undergraduate students on the OOI Irminger Sea cruise. You can check out their blog here. Perhaps this will be their SSV Corwith Cramer moment. 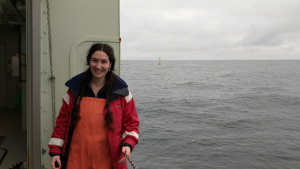 Hilary Palevsky on the deck of the R/V Neil Armstrong, with the surface mooring buoy visible in the water to the right of the ship. Photo credit: Lucy Wanzer 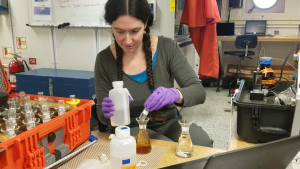 Hilary Palevsky preparing to measure the dissolved oxygen concentration of a seawater sample in the main laboratory of the R/V Neil Armstrong. Photo credit: Emma Jackman 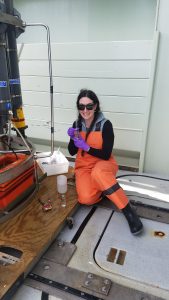 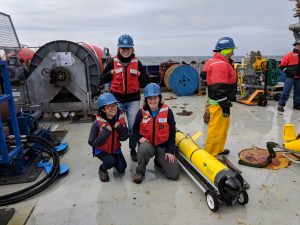 Hilary Palevsky (kneeling, right) with Wellesley students Emma Jackman (kneeling, left) and Lucy Wanzer (standing), next to one of the gliders configured for air calibration of the oxygen sensor, while preparing for deployment at the Irminger Sea Array. Photo credit: Henry Holm