Home :: What's New ::Early Career Highlight – Brendan Philip – From a life on the sea surface to exploration of the seafloor

Brendan Philip was not born at sea, but within 2 days he was on the ocean. Philip had an oceanographer’s dream childhood living on a sailboat in Seattle for nine months and then sailing around the Northwest Pacific and British Columbia for the other three from age zero to eighteen. “From a very early age I was hooked on the natural world,” reflects Philip. “We would anchor in a cove at the foot of a glacier and be the only people in sight.”

Ironically, with his childhood a sea, he grew up wanting to be a chemist on land. “I always enjoyed doing chemistry labs in school,” says Philip, “the thought that I could do that at sea never even crossed my mind.”

In his senior year of high school, Philip had the opportunity to take an oceanography class taught by the University of Washington (UW). In that class, Philip realized how he could merge his passions and use chemistry to understand the ocean. “I look back on the class and think of just how critical that was for me,” says Philip. From that class onward Philip’s path was clear – a bachelor’s degree from the oceanography department at the UW.

During his freshman year at UW, Philip applied to go on the 2011 OOI Cabled Array cruise – the first cruise after the 2011 Axial Seamount eruption.  “I got to see hydrothermal vents for the first time and new seafloor formed from the eruption that was only a couple months old,” says Philip. “I learned that it was the seafloor – the part that was invisible to me while I was sailing on the surface – that I was really passionate about.”

After that first cruise, Philip sailed with the UW OOI team every year until graduation in 2014. At that time, the Cabled Array was still under construction, so data were not yet available. Instead, Philip used the ship-based multi-beam sonar data collected at the Southern Hydrate Ridge during these cruises for his undergraduate thesis. “I was able to leverage the use of the ship during ROV turn arounds to get really high-resolution images of bubble plume variability,” says Philip, “and we discovered that methane from this site was making it much higher into the water column that we previously thought.” This work led to a publication in Geochemistry, Geophysics, Geosystems.

In addition to these new insights in methane plume variability on that cruise, Philip discovered an entirely new methane seep site. “We actually discovered that new site while transiting from one OOI site to another,” says Philip. “I was batch processing data the sonar was collecting during transit and I noticed this really robust site, so we conducted an ROV dive on it to learn more.”

After graduation, Philip went to work for the OOI as a research scientist at the UW, focusing on instrument refurbishment and planning deployments.

OOI data went online in December 2015 and Philip applied to the PhD program at the University of Washington to explore this newly available data. “I now have a great background in the instrumentation and data now that I am working with it,” says Philip, “and can help my fellow scientists who may only be seeing this for the first time.”

Philip’s PhD project is examining that same methane seep site that he discovered in 2014, located 20 km south of the OOI Southern Hydrate Ridge site. “That’s the amazing thing about the OOI, it gives you the opportunity to discover things that you would never have been able to,” says Philip. “This new hydrate site could have very easily been overlooked.”

In fact, the site was so active, with fluid and gas bubbling out of a two-inch hole in the seafloor at a rate of 15-30 cm/second, that Philip and the rest of the team were funded to study it for 2 years. “We are trying to figure out the source of the fluid in the seafloor,” says Philip, “and what that tells us about seafloor hydrogeology. The discovery of this site may offer us a window into to reactions that occur within the seafloor at subduction zones and are typically very hard to sample.”

Philip is using OOI ADCP data in his research in order to understand the variability of emissions at Southern Hydrate Ridge. “A big question within the seep community is how much of the methane derived from seafloor seeps is in the dissolved in fluid vs in bubble form,” explains Philip. “The best way to quantify the bubble component is sonars, and right now the only acoustic component out there are ADCPs.”

ADCPs are a workable solution, but not perfect. With the OOI’s expandable architecture and the constant technological innovation in the oceanographic community, there is room to enhance these abilities. “I am really excited about future opportunities to allow us to be present and continuously to detect methane emissions.” Says Philip. “There are so many outstanding questions this site can help us answer about methane seep dynamics.”

Not only does the OOI provide a myriad of data, it also presents an opportunity with ship time. “It’s a 25-year program and you have committed to sailing every year to service your arrays,” says Philip, “that is a tremendous opportunity for students and researchers on board to do research that leverages the OOI instrumentation. The OOI is more than just data streaming to shore, it is also about the additional science you can do while you are out there.”

Philip knows first-hand about those ship time opportunities from his undergraduate tenure and has been able to now see that paid forward with the next generation of students. “There are a couple of high school students that have been out to sea with us that are now undergraduate students at UW,” says Philip. “It has been really cool to see students come out for the first time – they are sometimes intimidated and overwhelmed. But by the end, you can tell that they just fit. That’s a really inspirational feeling.”

In addition, Philip is paying it forward with frequent visits to high schools to talk about the ocean and the OOI. “It’s beyond having them become an oceanographer,” says Philip, “it’s about having them learn they can pursue something they are passionate about.”

In terms of future plans, Philip has another 4 years to go to complete his PhD. After that, he hopes to get a postdoctoral fellowship or potentially explore fields beyond research and engage with science policy.

In terms of the future of ocean science, that path is also clear to Philip. “One of the good outcomes of having publicly available data is that it almost requires community collaboration to process and work up these data into results. We’re at a paradigm shift here because we are starting think about how to handle competition between many groups using these same data. The answer to that is collaboration.” 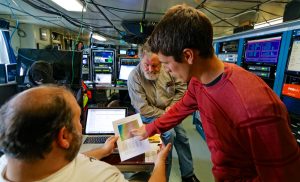 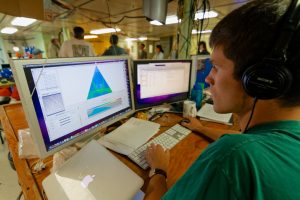 Editing multibeam sonar data to extract bubble plume acoustic data during the Visions’13 cruise onboard the R/V Thompson in 2013. These data are used to understand variability in emissions and to identify active sites on the seafloor for OOI instrumentation. Credit: Ed McNichol 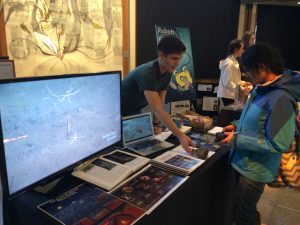 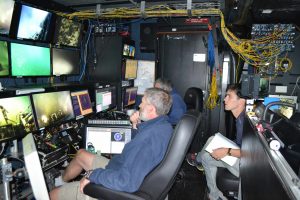 Leading a ROV Jason dive at a newly discovered seafloor seep during the Visions’16 expedition onboard the R/V Sikuliaq in 2016. OOI mooring deployments often free up the use of the ROV, allowing for exploration of near-by sites of scientific interest. (Image credit: Mitch Elend, University of Washington)” 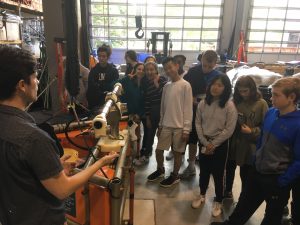 Explaining to 8th graders from the Northwest School, Seattle, how the OOI high definition video camera observes hydrothermal vents on Axial Seamount, as part of an annual visit to the School of Oceanography at the University of Washington in 2018. (Image credit: Herb Bergamini, Northwest School) 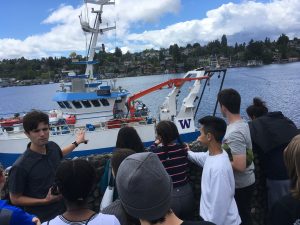