When opportunity knocks, Veronica Tamsitt seems to always answer the door. So, when the University of Washington (UW) offered her a rowing scholarship, she traveled 8,000 miles from her home in Bungendore, Australia to join the Huskies. “I hadn’t decided what exactly I wanted to study at the time,” says Tamsitt, “something with science or engineering, something where I could use my hands.”

After getting settled at UW, Tamsitt began to solidify her interests and met with an academic advisor in the Oceanography department. Once again Tamsitt heard the ‘tap tap’ of opportunity – “Oceanography for me happened a little by chance,” says Tamsitt, “the seniors had just been on a research trip to the Galapagos Islands, so I said, ‘sign me up!’ ”

For her own senior thesis, Tamsitt and her cohort went on a 10-day cruise off the coast of Mexico near the Oxygen Minimum Zone (OMZ). Tamsitt’s project focused on measuring nitrous oxide concentrations in the ocean and then estimating its flux into the atmosphere. “With no oxygen in the OMZ,” says Tamsitt, “microbes are breaking down nitrogen compounds, so these areas are real hotspots for nitrous oxide flux.”

After undergraduate, Tamsitt went straight into a PhD program at the Scripps Institution of Oceanography working with Lynne Talley. There her dissertation work focused on three-dimensional deep ocean circulation in the Southern Ocean. “I ended up doing a modeling PhD even though don’t think of myself as a modeler,” says Tamsitt. “But there was an opportunity to use a data assimilation model to answer the questions I was interested in, so I took it.”

During her graduate work, Tamsitt sailed on an OOI cruise to the Southern Ocean Array from late 2015 into early 2016 to deploy biogeochemical Argo floats in the vicinity of the array.  “You can’t just drop these floats in the water like regular Argo floats,” says Tamsitt, “you have to take water samples and calibrate them. We used water from the OOI CTD bottle samples to help with that calibration and deployed right by the surface mooring.”

Deploying next to the surface mooring provides an unprecedented opportunity to compare data across multiple platforms in this under sampled region. Additionally, since the surface mooring has a more comprehensive suite of carbonate sensors than the floats, researchers can get a more complete picture of the carbon cycle at that location and then extend that picture into the area covered by the floats. “My primary interest is air-sea fluxes of heat, but I am very excited by this carbon story,” says Tamsitt, “I hope that someone starts looking at those data soon too.”

This cruise also happened to be Tamsitt’s first mooring deployment cruise. Not one to pass up something interesting, Tamsitt embraced the mooring data while on board and helped to validate it. She came away from the cruise with a brand-new dataset that no one seemed to be looking at yet, air-sea heat flux from the Southern Ocean Surface Mooring.

With the ocean taking up 90% of the excess heat humans are putting into the atmosphere and a lot of that heat removal occurring in the Southern Ocean, this is a key research area. “We have a really limited understanding of the direct exchange between the air and the sea there,” says Tamsitt. “So much so that often we don’t even know if heat is going in or out. The Southern Ocean is really the key to understanding net ocean heat uptake and how its changing.”

Even though these data were a side project to her main dissertation objectives, Tamsitt could not pass it up. Over the next two summers, Tamsitt worked with an undergraduate student in the Talley laboratory, Sarah Ogle, from Carleton College in Minnesota as she analyzed the dataset. “We lucked out with Sarah, she was a San Diego native coming home every summer to help us on this project,” reflects Tamsitt.

The result of this effort was the first publication to use OOI data from the Southern Hemisphere, Ogle, et al. 2018, published in Geophysical Research Letters. “It was cool working on this publication because the Southern Ocean research community was so excited about it,” says Tamsitt. “It felt like everyone really cared about us publishing this work; showing just how valuable these data are.”

Having completed her dissertation in March, Tamsitt is on to her next adventure, which happens to have taken her back to Australia as a postdoctoral scholar at the University of New South Wales and a member of the Center for Southern Hemisphere Ocean Research at CSIRO in Hobart. “I hadn’t intended necessarily to move back to Australia,” says Tamsitt, “but this great postdoc came up, so of course I took it!” Though she’s now back across the Pacific, Tamsitt is still using OOI Southern Ocean Array data, as she quickly confirms, “oh yes, I was using it yesterday.”

To Tamsitt, the OOI is a game changer in the Southern Ocean. “In the air-sea flux community, there are almost no measurements in the Southern Ocean except from ships,” says Tamsitt. “The OOI Surface Mooring is the southernmost mooring ever deployed, the only one out there other than south of Australia.”

And it is not just about the moorings, the OOI is a key asset for ship time in this under sampled area. “Not many people do work in the Southern Hemisphere, so we struggle to find ships going the right places the right time for our deployments,” says Tamsitt. “At the time, the OOI’s Southern Hemisphere cruises were a regular occurrence, so we knew we had that cruise every year.”

For her post-doctoral work, Tamsitt will be comparing data from the OOI with the other Southern Ocean mooring, deployed southwest of Tasmania, the Southern Ocean Time Series Observatory (SOTS). Both moorings are in regions of deep water mixing and regions where water mass formation is really important for heat and carbon uptake, however, these regions differ greatly when it comes to El Niño. “By comparing these two moorings we are trying to understand how air-sea heat exchange and winter mixing are influenced by El Niño,” says Tamsitt. “These moorings are really interesting to compare and they are somehow fortuitously both located in areas of deep winter mixing, perfect for looking at these processes.”

Just as the location of those moorings was more carefully planned and executed through hard work and determination than simply fortuitous, so has been Tamsitt’s career of ‘chance’ and ‘opportunity.’ “I guess I just don’t walk away from chances,” says Tamsitt. “I see that opportunity and say – I want to do that.”

A lot of this grit and persistence she credits to her training as an athlete. “At the time I felt like I was spending my whole life training,” she reflects, “but to be honest I feel like I have such good time management and self-discipline and sticking at things, just going at it. The work ethic you learn as an athlete really translates. I don’t think anything I did in my PhD is as hard as a 2-kilometer rowing machine test.”

In terms of her next steps, Tamsitt is interested in continuing her research, but also sees the need to connect research to policy makers. After all, she did help develop a 2-week intensive environmental science and policy course for high school students through the University of California San Diego Academic Connections – Global Environmental Leadership & Sustainability Washington DC.

Whatever direction she heads in, it is clear that Tamsitt’s future is going to have a lot of opportunities, and it is also clear that she is going to make the most of them. 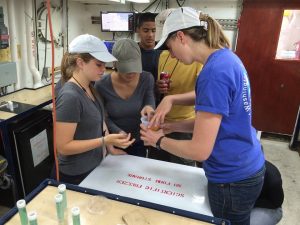 Having a closer look at some biological samples collected on the RV Sproul in San Diego Bay. Photo Credit Julia Fiedler. 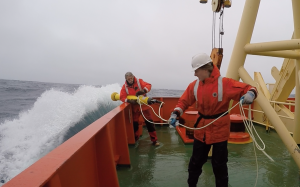 Preparing to deploy a SOCCOM float from the RV Palmer in rough conditions near the OOI Southern Ocean mooring in December 2015. Photo credit OOI. 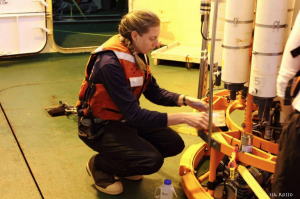 Preparing instruments on the CTD for deployment on the RV Palmer in 2014. Photo credit Isa Rosso. 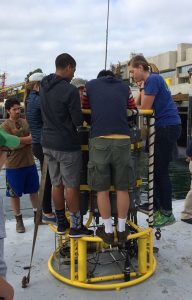 Teaching high school students how to set up a CTD on the RV Sproul in San Diego Bay. Photo Credit Julia Fiedler.