Home :: What's New ::Early Career Highlight – Wu-Jung Lee’s journey into ocean sound from dolphins to bats and back to the sea

Wu-Jung Lee grew up in Taiwan feeling landlocked. Though Taiwan is a small island about the size of Maryland, the majority of the population did not visit the ocean or know much about it. This is in sharp contrast to the abundant fishing industry on the island. “One of the sayings in Taiwan is that we are a seafood culture, but not an ocean culture,” says Lee. “Seafood is a big part of the diet, but people don’t always think about where that food comes from.”

The summer after her freshman year at the National Taiwan University, however, that was about to change for Lee. At the time, whale watching was just beginning off the east coast of Taiwan and the government was looking to help boost the burgeoning ecotourism industry by providing money to train interpreters on fishing-vessels-turned-whale-watching boats. Lee signed up. “That was my first time going out on the ocean all the time and learning what was out there,” says Lee. “I may have been out on a boat once before.”

While these boat excursions were meant to find whales and dolphins, they did not always find them. “You need to interpret anything you see,” says Lee, “because you don’t always see dolphins so you talk about waves and clouds.” And so began Lee’s journey learning about the ocean.

During undergraduate, Lee was a double major in Electrical Engineering and Life Science with a Zoology focus and a particular interest in signal processing. “I wanted to do something where I could combine signal processing and something about the ocean and biology together,” says Lee. “So acoustic analysis and bio-acoustics seemed a good fit.” Except that no one in Taiwan was working on that type of analysis.

Moving half way across the Pacific, Lee took up an internship at the University of Hawaii working to analyze the songs of humpback whales and the echolocation clicks of dolphins. This internship provided Lee with her first experience working in acoustics and as she says – “Everything went from there.”

After completing her internship, Lee continued her journey east to Massachusetts to complete a PhD in the Massachusetts Institute of Technology (MIT) – Woods Hole Oceanographic Institution (WHOI) joint program in Applied Ocean Science and Engineering. Her PhD focused on developing active acoustic techniques to observe marine organisms. Her interdisciplinary focus meant that she also had an “interesting co-advising situation” with three advisors – two physicists and one whale biologist.

Using echoes returned from sonar emissions to figure out what is in the ocean is a tricky business, but animals who use echolocation – or biological sonar – to sense the environment and find food had figured it out long ago through millions of years of evolution. Seeking to understand more about the mechanisms behind echolocation by digging into the world of neuroscience, Lee had two choices – stay “underwater” to learn from the sonar of dolphins or try to work with their counterpart in the air. Lee chose the bats.

For the next two and a half years, Lee left the ocean world and worked as a postdoctoral fellow at Johns Hopkins University in their Department of Psychological and Brain Sciences. The bats at the facility were trained to perform different experimental tasks designed to probe their sonar capability and the neural mechanisms behind it. “In a way I was doing the same thing as in the ocean,” says Lee, “because I was trying to learn how the bats use sonar and process information; it’s just the context that changes a little bit.” The result is a section of Lee’s publication list with titles that include – “Tongue-driven sonar beam steering by a lingual echolocating fruit bat.”

After two plus years of bats, Lee missed the ocean and going out to sea, so she took to a postdoctoral fellowship at the University of Washington (UW) Applied Physics Laboratory (APL). It was there that Lee discovered the OOI.

“One of the reasons I first got interested in the OOI data was because it is free and available to the public,” says Lee. “The way my funding was set up, I had a salary, but minimal funding for research expenses, so I started to look for free options. Once I started working with the data, I realized just how special it was. I spent all of my time for several months on the OOI echosounder data.”

Lee, like many other oceanographers, has realized that when you have real- to near-real time data constantly streaming to shore, you end up with a lot of data. “OOI data are too big to really look at by yourself,” says Lee. “It was very obvious when I started working with the OOI that we needed new tools to work with the data.”

To help tackle these challenges of big data, Lee began collaborating with the eScience Institute at UW. That collaboration led to the UW Cabled Array Hackweek in February 2018 and the upcoming Oceanhackweek in August 2018. Here, participants, ranging from students through senior scientists, lean into computational data analysis to work with and create products for users to analyze data from the OOI and other ocean observing systems.

For her current research, Lee is working closely with another Hackweek co-organizer, Valentina Staneva, a mathematician and data scientist at eScience, on the OOI echosounder data. “What we are hoping to do is to change the way we look at echosounder data,” says Lee. “The computational processing currently relies very heavily on human intervention. This is not really efficient when you have 4 years of data.”

The current system used across fisheries to process echosounder data is very labor intensive. The data are processed very carefully to pull out which noises are fish and which are background. The final stage involves an echosounder expert (who has worked with these data in this specific system for years) sitting in front of a computer scrolling manually through the data and circling which are the right type of fish.

Lee and her colleague are proposing instead to process the streaming data in large chunks by running them through an algorithm to recognize trends and patterns in the echosounder data and how those patterns change over time. The basic formulation of this algorithm is similar to those used to look for trends in Facebook and Netflix recommendation systems. “We are trying to adapt a machine learning method to analyze data in a data-driven way,” says Lee.

Not only would this algorithm help Lee process data for her research, it would potentially open the door for others to do their own exploration. “Once completed, this will be something we will make public so that anyone can use it,” says Lee. “Echosounder data are somewhat specialized, you need to know what you are looking at to tell a story. Our hope is that this algorithm will help reduce the complexity of the data to a form that folks can handle in conjunction with data from other sensors.”

This type of public, open access is what drew Lee to the OOI. “Democratization of data and access,” says Lee. “The more we can make it easier for everyone, whoever is interested in analyzing the data the better. Oceanography is mostly a mystery still for the public. But because OOI data are completely out there for anyone to access, maybe that will help shorten the gap between the general public and the scientists.”

The OOI also shortens the gap in oceanography education. “I had a conversation with a committee member once,” says Lee, “about how oceanography is dominated by big schools with lots of facilities. But this is a new capability with telepresence and infrastructure available for everyone. There are still things you just have to go to sea for, but you can do a lot with the data. The OOI is a very special asset.”

“More and more countries are putting these observatories in place with free data,” Lee adds. “The playing field is never going to be level, but it enables more people to do different things.”

As for Taiwan, folks do go to the coast more now, and often out to sea. Awareness about the ocean and environmental issues are “way up right now,” says Lee, which she credits to social media, a different kind of ocean full of big, open data.

Want to read more about Lee’s research? Check out her research blog with posts on the 2017 Solar Eclipse and trawling for zooplankton. 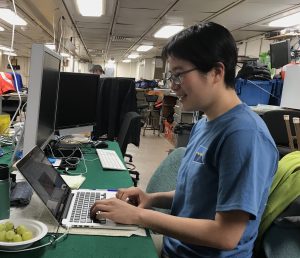 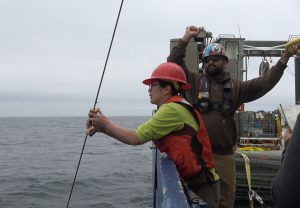 Dropping the “messenger” down on a wire to close a zooplankton sampling net. Credit: Romina Centurion/UW 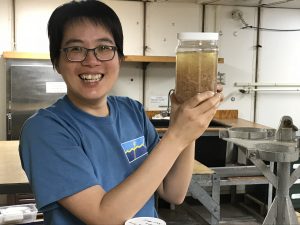 Checking a jar of samples full of krill and other creatures. Credit: Romina Centurion/UW 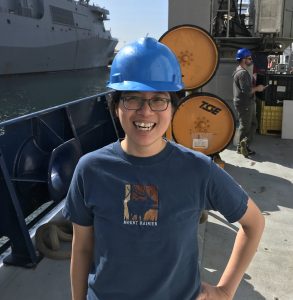 On the deck on R/V Roger Revelle after VISIONS’18 concluded in Seattle. Credit: Romina Centurion/UW