The shelf break front is a persistent feature in the Middle Atlantic Bight, with the foot of the front found near the 100 m isobath. Warm core rings pinched off from the Gulf Stream are found over the continental slope, and have significant impacts on the frontal system when they impinge on the shelf. Zhang and Partida, 2018 use data from OOI Pioneer Array moorings and gliders to document a unique shelf/slope interaction related to the presence of a warm core ring.

Satellite SST imagery shows a well-formed ring impinging on the shelf south of New England during June 2014. Observations from the Pioneer Offshore and Central Offshore moorings are able to identify relatively cold, fresh shelf water that migrates downward with time during the period that ring water is at the surface. Relatively high dissolved oxygen concentration indicates that the shelf water was recently exposed to the surface. This suggests that shelf water filaments are being subducted at the edge of the ring. A cross-shelf section from the Pioneer EB glider (Figure above) clearly shows the cold, fresh shelf water beneath warm, salty ring water. The shelf water is seen well offshore of 100 m where the frontal boundary would be expected in the absence of interaction with the ring.

Computer simulations reproduce the observed phenomenon and reveal the underlying mechanism. The onshore movement of the warm-core ring sharpens the interface between the ring and shelf waters. The subducted flow results from circulation trying to relax the sharpening interface and serves to transport sub mesoscale filaments of shelf water offshore. This offshore flow of subducted shelf water may be a significant exchange mechanism, but has not been well studied. It does not have a surface signature and cannot be seen by satellites. 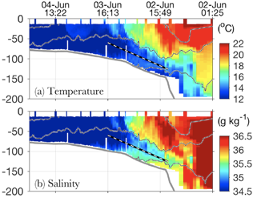 Cross-shelf sections of temperature (a) and salinity (b) observed by the Pioneer EB glider during 2-4 June 2014. Isopycnals at a contour interval of 0.5 kg/m3 are overlaid (thin lines). Dashed lines highlight the shelf water being subducted and moving offshore. From Zhang and Partida (2018).