Mei Sato grew up surrounded by the ocean in Japan. It permeated every aspect of her life from swimming to fishing to the cultural importance of eating seafood as well as learning to prepare for tsunamis.

In high school Sato had a chance to meet with a local fisherman, Mr. Shigeatsu Hatakeyama, and that started her interest in a career in ocean sciences. The fisherman had an aquaculture farm and was planting trees upstream to protect ‘his’ ocean by providing clean nutrient-rich water that keep his oysters healthy. “His efforts made me realize how different ecosystems are interconnected to each other,” says Sato. “I became very interested in what is going on in marine ecosystems and how connected they are to land ecosystems.”

To pursue this new passion, Sato enrolled in the Tokyo University of Fisheries (now Tokyo University of Marine Science and Technology) and began a major in Aquaculture. One of the unique requirements of this school was that each student had to take a course for five days to learn how to swim in the ocean. The location for the course was Tokyo Bay, complete with floating garbage and tanker traffic. “It was a very intense class,” says Sato, “the school took it very seriously that everyone needs to swim. For our final we had to swim for 2-3 hours straight. There was a small boat nearby in case you needed to be pulled on board.”

Additionally, while at college, Sato was able to take advantage of an exchange program with the University of Victoria (UVic) in British Columbia, Canada. During that year at UVic, Sato was able to take oceanography courses and shortly after changed her major to Biological Oceanography. “I am excited about the interaction between biology and physics,” says Sato. “They are tightly coupled together but it is so complicated.”

After completing her undergraduate degree, Sato applied for a master’s program at the Darling Marine Center in the University of Maine. There she began to work with bio-acoustics systems and explore how biological and physical interactions impact animal behavior. To do this, she created her own tiny cabled observatory off the dock of the marine station. Her observatory consisted of a laptop in a waterproof box on the dock connected by cable to deployed sensors (bio-acoustic sonar, ADCP, fluorometer, and CTD) on the bottom, 10 meters deep. These sensors were deployed for three months at a time across two summers.

“It is fun to think that I was working with a much much smaller version of the OOI Cabled Array,” says Sato. “I know just how much work it is for you all to run the OOI because my small thing was so hard. I had to SCUBA dive 3 times a week to clean the instruments, even recovery and deployment were challenging with the small PVC frames. And once there was a thunderstorm and the acoustic sensor died due to lightning strike.”

After her master’s, Sato decided to explore the world outside of academia and went back to Japan to work in the engineering department of a company that makes fish finders. Sato worked with universities and government fishery institutions to create a novel fish finder for fishermen using similar technologies to the bio-acoustic systems she used in her research. After two years, Sato realized that she was being held back professionally because she was a woman. With superstitions about women onboard fishing vessels she was not able to get the same field opportunities as her male counterparts. So, she decided to leave the industry in Japan and head back across the Pacific to UVic and began her PhD.

During her PhD, Sato worked with acoustics on another cabled observatory, the Ocean Networks Canada (ONC).  “At the time, no one was really using the acoustic data because they were not calibrated yet,” says Sato. Not one to be so easily deterred, Sato decided to take matters into her own hands and calibrated the sensors with the ONC team. “I learned a lot through the calibration process,” says Sato. “It was a really good experience to learn how everything works. The ONC team and the sensor manufacturer were both very helpful and patient throughout the process.” The calibration values are now applied to the ONC data and freely accessible online. She then used the newly calibrated acoustic data to examine seasonal variations in diel vertical migration of krill in Saanich Inlet, British Columbia.

After her PhD, Sato hopped across the Juan de Fuca Strait and began a post-doctoral fellowship at the University of Washington. During her post doc, Sato moved higher up in the food chain to look at fish, specifically how hypoxia in Puget Sound impacts herring and hake distributions.

Continuing her move south, Sato did a second post doc at Oregon State University with Drs. Kelly Benoit-Bird and Jack Barth. She was very excited about getting a chance to dive into the OOI data, but at the time the OOI bio-acoustic sonar data were not calibrated. So once again Sato climbing onboard to help calibrate the bio-acoustic sensors. Sato and Benoit-Bird worked with the OOI team from OSU on these calibrations and they currently have a paper about their work under review. “We are hoping that the product we are developing can be used on the echosounders throughout the OOI,” says Sato. “This calibration was very challenging because the echosounders are deployed so deep.”

Calibrating bio-acoustic sensors is much more involved than physical sensors where one could simply apply calibration values provided by the manufacturers. With the bio-acoustic sensor you need to position a small sphere, about the size of a golf ball, over the transducer while it is deployed, which for the OOI is 200 meters below the sea surface. The solution the OOI team came up with was to attach the sphere to the sensor via a fishing line with a float on it so that it could hover above the transducer. Since you only want the sphere there during calibration, the OOI team employed a “sacrificial link” at the attachment point with the float so that after the link dissolved, the float would be released and the sphere would disappeared from the sampling area. Though a very clever design, it was met with its share of challenges, like tangled fishing line. For instances when sphere deployment is not possible, the team investigated cross calibration with acoustic sensors on the ship.

Sato is using these bio-acoustic data collected at the Coastal Endurance Array Oregon Line to explore the links between upwelling strength and zooplankton diel vertical migration in the California Current System. “We used to not be able to measure such small-scale changes because we only had a snap shot from the ship-based surveys,” says Sato. “But now with the OOI’s continuous, high-resolution data, we can now answer questions that we couldn’t have tackled before. It is exciting because usually with cabled observatories, we only have one site in an area, but with the OOI we have three sites going across the shelf so we can see the spatial changes too.”

Sato is now a researcher at the University of British Columbia in Vancouver where she continues to move up the food chain, this time studying the interactions between Chinook salmon and killer whales by collaborating with Dr. Andrew Trites. As part of her research Sato is trying to determine if you can detect Chinook using a portable hydro-acoustic system on the boat. Because Chinook are strong swimmers, Sato cannot trawl for them to see if they are present, she has to bring a fisherman onboard to catch them to validate acoustic signals. And so, it appears Sato has come full circle from struggling to be invited to work on fishing vessels in Japan, to inviting fishermen aboard her own boat.

In terms of her next step, she has already reached the zenith of the food chain, so it will be interesting to see what new organisms Sato tries to capture with her echosounders. Regardless, one thing is clear, Sato wants to stay connected to her observatories. “I want to keep my ONC and OOI connection as a continuation of my research to understand biological-physical interactions,” says Sato. She did, after all, spend a lot of effort calibrating those sensors.

“The OOI is great opportunity for early career scientists,” says Sato. “They don’t have a lot of money or equipment or ship time. With the OOI we can explore a lot of questions that we want to answer.” Because Sato’s research is so interdisciplinary, she requires biological and physical data in addition to the acoustics. Purchasing and deploying all of those sensors would be beyond the scope of something she could do by herself, or any other early career scientist for that matter. But she does not have to, the OOI has these sensors available to her. “Having all of those sensors available at the same time as bioacoustics data is a huge opportunity for me and other scientists,” says Sato. “It is not just biology or physics, it is the coupling that is so critical. I think the OOI will provide a big opportunity for us to answer questions in this gap.”

Sato is still in touch with the fisherman and he has been planting trees for the last 30 years. Many of his colleagues are planting trees now too and they conduct outreach events with local elementary school students to share their story and help plant trees to develop the forest too. In addition to planting trees that day, he planted a seed in Sato that drew her to ocean research. And just like her old friend, Sato thinks beyond her immediate research and is planting trees for others too, by making the echosounder data more accessible. 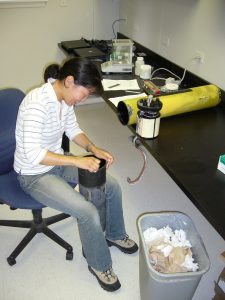 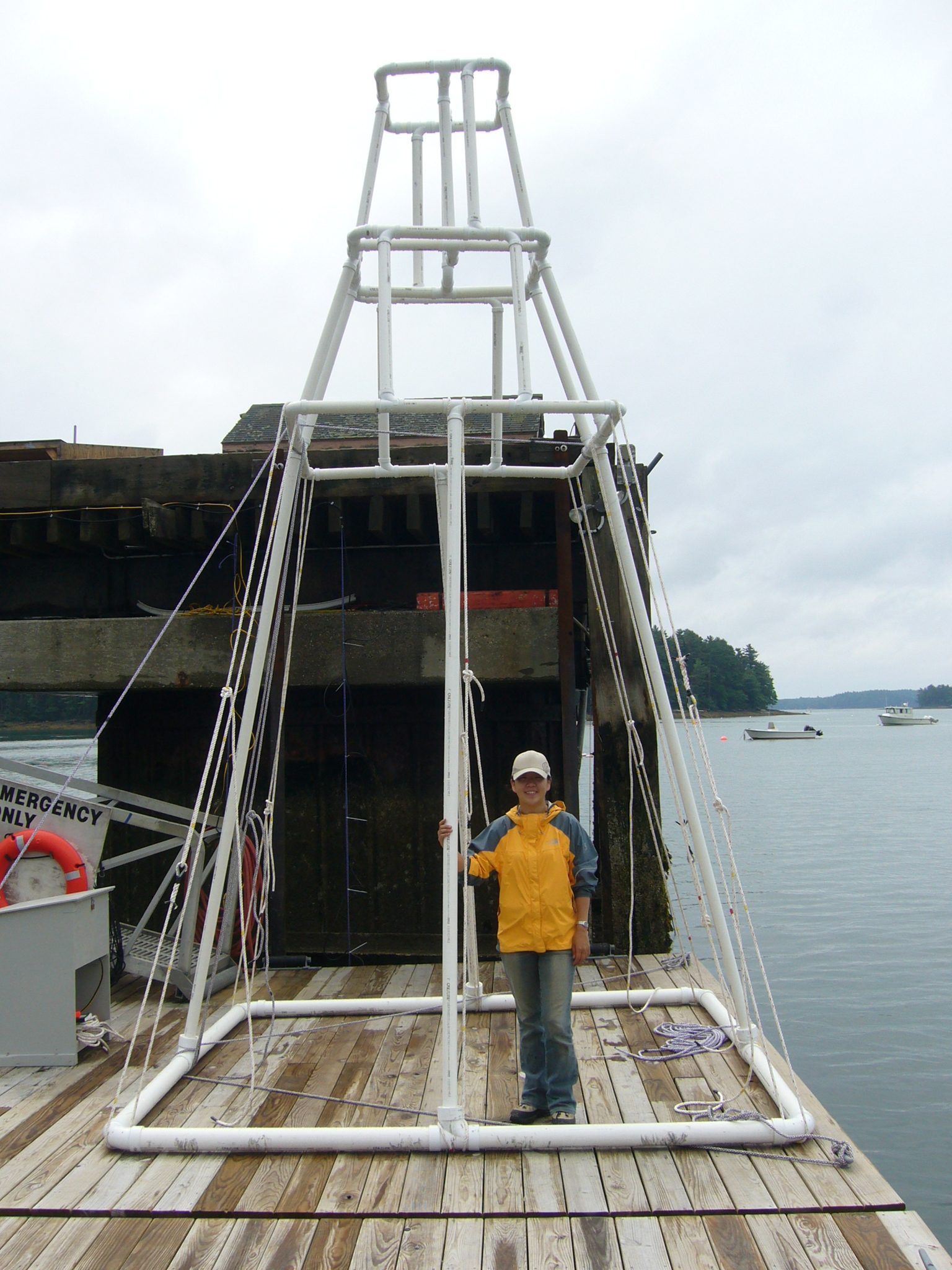 Frame to deploy hydroacoustics underwater, made of PVC pipes, at the dock of Darling Marine Center. Credit: Mei Sato 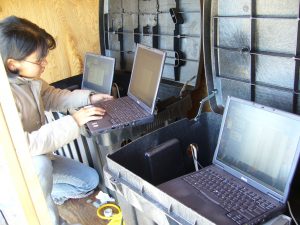 Monitoring data collection of the mini-cabled observatory located on the dock of the Darling Marine Center. Credit: Mei Sato 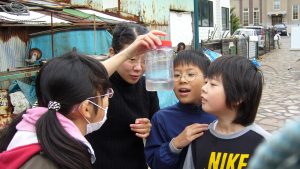 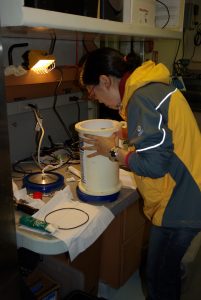 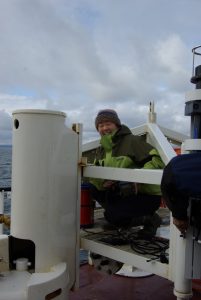 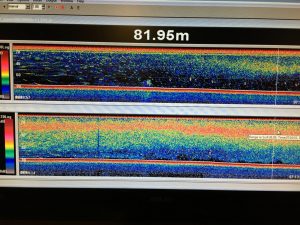 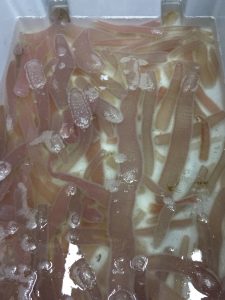