A recent paper by Josey et al. [1] use data from the OOI Irminger Sea surface mooring to present the ﬁrst characterization of multi-winter surface heat exchange at a high latitude North Atlantic site based on in-situ measurements. Heat loss in the North Atlantic is a primary determinant of how much deep water is formed in a given winter, which ultimately influences the strength of the Atlantic circulation. The Irminger Sea is a key deep convection site [2], [3], but the amount of heat lost is poorly known because winter measurements are difﬁcult to obtain in the harsh environment [1].

Data from the first four deployments of the Irmginer surface mooring provided early winter observations in three consecutive years – 2014, 2015 and 2016. Strong variations on times scales of days to weeks are apparent in the air-sea flux components. These combine to create net heat losses exceeding 400 W/m^2 on at least one occasion each winter (Fig. 1 d).

The integrated effects of the anomalously strong heat loss events in 2014–2015 result in cumulative net heat loss significantly greater than following years (Fig. 1 e,f) This is primarily due to variations in frequency of intense short timescale (1–3 days) forcing (Fig. 1g) that would be difficult to detect without the mooring observations.

Interpreting the observations in the context of a high-resolution atmospheric model (European Centre for Medium Range Weather Forecasts Reanalysis 5) shows that the main source of multi-winter variability is changes in the frequency of Greenland tip jets that can result in hourly mean heat loss exceeding 800 W/m2 (Fig. 1g). The tip-jet events result from the mountainous Greenland terrain, which focuses winds into narrow, very strong jets over the ocean [4], [5]. Josey et al. [1] suggest how changing atmospheric circulation may influence the number of events and hence the ocean heat loss.

Improved understanding of Irminger Sea winter heat loss is likely to be critical to reliable projections of future changes in both the North Atlantic overturning circulation and climate variability. 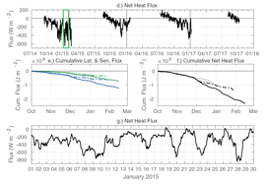