Blow down of the 200-meter Shallow Profiler Mooring Platform 2019

In June and August, 2019, the Slope Base Shallow Profiler Mooring was impacted by two substantial “blow down” events: these were the first observances of blow downs since the moorings were installed in 2014. The largest of these events, which occurred near the end of July and which lasted over two weeks, resulted in a deepening of the 12 ft across, 7,000 lb. platform nearly 50 m and migration of the platform ~ 150 m to the west. Results from pressure, ADCP, temperature and oxygen data pulled from CI using M2M, indicate that as the currents strengthened, the float was depressed into ~ 0.25-0.50°C cooler water with slightly decreased oxygen concentrations. An evaluation of the eddy kinetic energy calculated from the ADCP data, does not support eddy-driven water mass transport. The lower oxygen concentrations could reflect lower amounts of photosynthesis as the platforms are pushed deeper into the water column. We do not know of other documented blow down events such as these in the PNW. 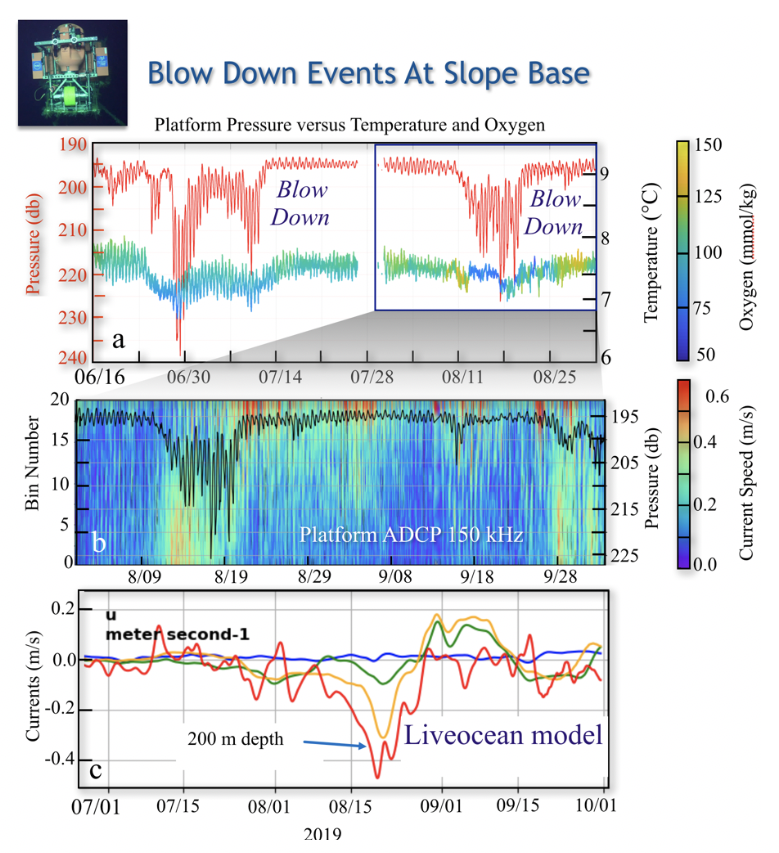 Blow down events at Slope Base 2019: a) Pressure, temperature and oxygen relationships during the blow down events of the 200 me deep Shallow Profiler Platform June – August 2019 b) ADCP data from an instrument on the platform documenting strong currents during the August blow down event. Liveocean modelling results (https://faculty.washington.edu/pmac/LO/P_basica.html) during this same period delineate strong currents from the east. This predictive 3D model does a full 72 hr forecast every day.