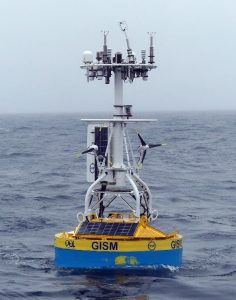 Fig. 1. Irminger-5 surface buoy after deployment in June 2018. Damage to the direct covariance flux sensor (center of tower) is evident.

The recently completed OOI mooring service cruise on the R/V Neil Armstrong (2-25 Aug 2019) established a significant milestone – the Irminger Sea Global Surface Mooring was sustained for over a year and returned high quality data. To our knowledge, this is the first surface mooring with instrumentation to compute bulk air-sea fluxes of heat, moisture and momentum that has operated through a full annual cycle in this region. 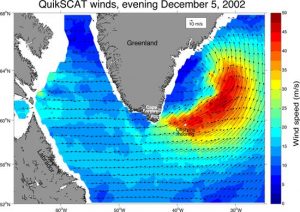 Cold-air outbreaks are associated with high winds, sub-freezing temperatures, and large, steep waves (Vage et al., 2008, J. Phys. Oceanogr., 38(3), DOI: 10.1175/2007JPO3678.1), which create very difficult conditions for sustained observations at the air-sea interface.  The situation is further complicated by the occasional passage of icebergs, which could impact the buoy. The lack of continuous time series data through the winter season capable of identifying episodic events has hindered understanding of air-sea interaction in the Irminger Sea.

The biggest risks to sustained operation of the OOI Irminger Sea mooring were determined to be icing on the buoy tower & freezing of sensitive instrument components.  Icing could not be controlled, but potential impacts could be mitigated, for example by shutting down the wind turbines to reduce the likelihood of broken blades. However, a turbine shut-down also meant reduced power generation.  Freezing of the precipitation sensor was controllable using a built-in heater, but at the cost of additional power. 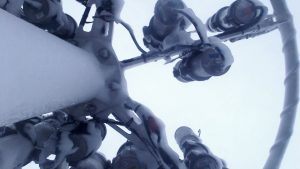 The CGSN operations team took on the challenge by monitoring weather forecasts for conditions conducive to icing, adding cameras to the buoy tower to detect icing, and implementing a power management strategy during storms. When icing conditions were forecast, the wind turbines were shut down to reduce the likelihood of damage, while some mooring components were simultaneously shut down to save power. Power to high priority instruments (including the bulk meteorology system) and the precipitation sensor heaters was maintained. The strategy was effective, but the difficulty of sustained observations was still evident: The direct-covariance flux package was damaged upon deployment and did not return useful data. The buoy sustained damage to the wind vane, a solar panel and a wind turbine during the winter storms. This compromised power generation capability eventually led to an eight-day data gap in June 2019 due to sustained low wind and overcast skies. 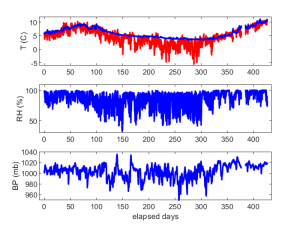 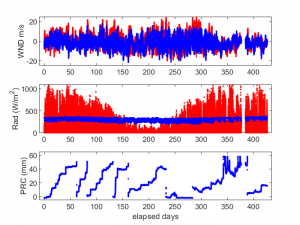 Despite the challenges, the buoy bulk meteorology system operated for 420 days of the 428-day deployment (8 June 2018 – 9 Aug 2019) and returned a wealth of scientific data. One-minute records from the bulk meteorology sensors show wind speeds up to 25 m/s and air temperatures as low as -5 C associated with cold -air outbreaks that likely dominate the cumulative wintertime heat loss, as described by Josey et al. (2019).  The availability of the first annual cycle of surface meteorology, in conjunction with subsurface data from the OOI Irminger Sea array and the Overturning in the Subpolar North Atlantic Program (OSNAP) array, provide the potential for new insights into the nature of deep mixing, carbon sequestration and deep-water formation in the region. 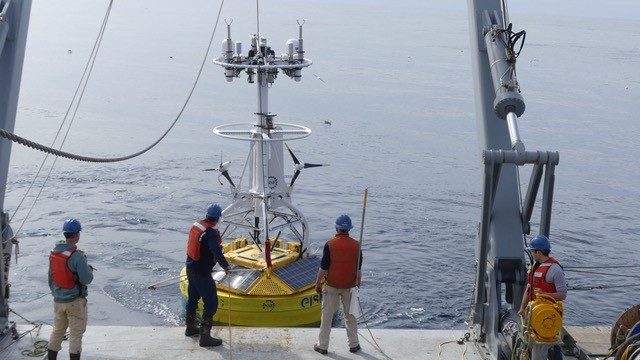 Fig. 5. Photo of the Irminger-5 buoy about to be recovered from the R/V/ Armstrong in August 2019. A close look shows damage to the wind turbine and solar panel on the left side.